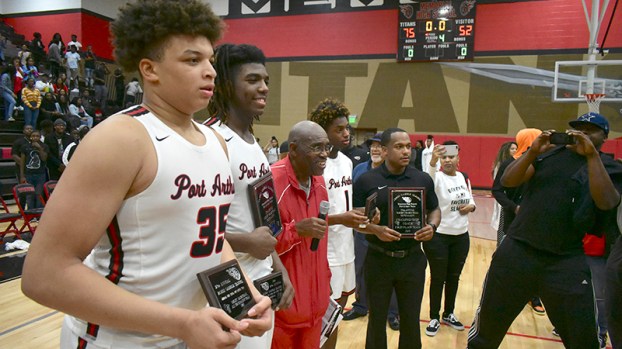 The James Gamble Classic was just what Alden Lewis hoped it would be — challenging.

“I believe it was a very competitive tournament,” he said. “I think the coaches got what they want out of it, whether it was games, competition, just pretty much playing basketball coming off of those five days that the UIL say we have to sit out.

“Man, that’s all you could ask for. That’s what the fans want. That’s what the coaches want. We want to be able to come in and compete at a high level and give our kids that type of environment that they are going to be facing in the playoffs. So we want a hostile environment. We want to make it very competitive and if we could keep it competitive, I think it’ll be a great success.”

Coach Lewis and the Titans finished the tournament with their fourth win in a row. It was an especially meaningful one as they fought the No. 2 ranked 6A team Summer Creek for it, a team that’s also now led  by the very same coach that pushed the Titans to their state championship win in 2018.

“They’re pretty tough,” he said. “They’re relentless and they’re going to keep coming at you. We were just fortunate enough to be on the other side of it and we handled everything that they threw at us. My kids maintained and were able to pull it out.”

Lewis had said earlier in the tournament that the Titans would need to shake off the dust after the five-day break if they were going to win, and shake they did.

“We had a variety,” he said of his team effort. “We had several guys that stepped up and played well. The bench contributed pretty well. Especially when you’re playing five games in three days, you need your bench and they came out. They came out and showed up. So that was good. I think it was a complete team effort.”

Barbers Hill comes to Port Arthur Friday for their first District 21-5A game at 7 p.m., and the Titans are entering district on a high note, Lewis said.

“I think we’re rolling,” he said. “I think we’re heading in the right direction. We have a couple of days off to where we can get back in the gym and fine tune some things and get a practice under us. And I think we’ll be ready to go on Friday.”

Before then, Lewis hopes the Titans can do some last-minute fine tuning.

“Once we fine tune everything, I think we’ll be rolling,” he said. “We’re focusing just basically on executing offense, then defense and just to get better all the way around. That’s what we want to do — get better each and every day. Like I tell my kids, let’s win today. Whether that’s in practice or the game, let’s win today.”