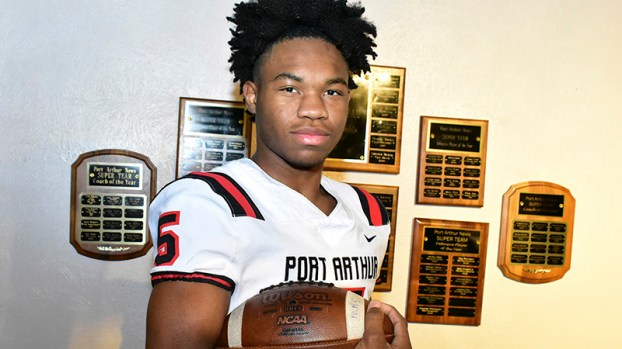 Memorial’s Jatavian Neal goes to the gym everyday with friend and fellow Titan Jaylon Guilbeau. The work he puts in is part of a mindset he says allowed him to achieve 48 tackles, two sacks and two interceptions during Memorial’s 5-6 football season. It’s a philosophy that bleeds over into his academic work, as well.

“It’s hard work and dedication, staying true to the game, working every day with my teammates,” he said. “We just put the work in every day. I keep my mind to it and go to school, have good grades, get an education. I just keep going.”

The Titan’s efforts paid off. Neal is The Port Arthur News 2019 Defensive Player of the Year.

“I made the super team last year and I made first team all district cornerback last year, so I have some small titles to my name, but this is a very big one and I’m very honored to be named defensive player of the year for Memorial High School,” he said.

Neal knows it takes a whole team to achieve success and makes it a point to foster this thinking for the rest of the Titans.

“I kind of consider myself as one of the captains of the team,” he said. “Once I got everybody together, every time we stepped on the field together we made each other better. We made sure everybody was good at the end of the day and that we could succeed to the next level.”

The senior has a few thoughts on his college prospects.

Oklahoma State University, his father’s alma mater, is his favorite, though he’s open to Texas A&M and UTSA.

“I want to be a mechanical engineer when I get to college, so I want to do that and play football at the same time,” he said. “I know there’s going to be a lot of changes once you get to the next level, but you just have to adapt to the environment and keep going.”

No one threw more than Port Neches-Groves’ Blake Bost. The prolific passer completed 195 passes on 336 attempts. For a... read more