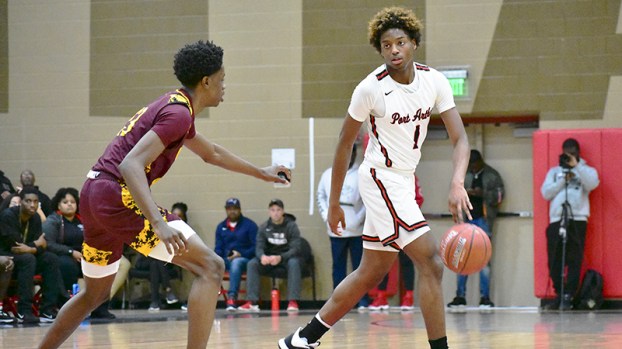 Amaree Abram (1) and the Memorial Titans are home for the holiday break and the James Gamble Classic. (I.C. Murrell/The News) 12-20-19

The Memorial Titans have won it in five of the past six years and eight times overall, but this year’s James Gamble Classic welcomes newcomers sure to serve up stiff competition.

“We’ve got to look at all the teams just as equally as anybody else, because they’re all going to present a challenge,” Titans head coach Alden Lewis said.

Among the new teams this year are 6A schools Katy Mayde Creek, Summer Creek and Houston Bellaire, as well as 5A TAPPS school Westbury Christian. They will be joined by Memorial, Houston St. Pius X, Houston Kashmere, Houston Austin and Houston Madison in the 10-team event beginning Thursday.

“We have some of the same, we have some new ones this year, which is making the field pretty interesting,” Lewis said. “I was able to reach out and get newer teams that haven’t came yet and they wanted to come down and participate in the tournament. We look forward to having them.”

All the teams enjoy a break from play earlier in the week, but the Titans have their recent 58-56 loss to rival Beaumont United on Friday to dwell on.

“United came and gave us a challenge, and we fought hard,” Lewis said. “It’s one of those types of games that prepare you for district and the playoffs. That’s all that we can ask for, is for our kids to come out and compete, and they did, even though we fell short, so we’ve got to go back to working and hopefully we’ll do better the next time.”

That next time will be against St. Pius at 1:30 p.m. Thursday in the Competition Gym. The Titans (13-5) toppled St. Pius last year 73-46 to take their eighth Gamble championship. The TAPPS 4-6A school lost to Houston Christian on Saturday 71-60 and owns a 12-7 record.

The Titans and Panthers share Pool A with District 19-6A’s Mayde Creek (11-6), whom Memorial will face Thursday at 7:30 p.m. in the Competition Gym.

Summer Creek (13-3, 1-0 in 22-6A) in Pool C may be one of the Titans’ toughest obstacles going forward in the tournament on Friday and Saturday. Summer Creek coach Kenneth Coleman led Memorial to the 2018 5A state championship.

The 22-6A Bulldogs defeated Memorial 92-67 on Dec. 6 and are ranked second in 6A by the Texas Association of Basketball Coaches as of Monday. Summer Creek also beat Humble 66-44 on Friday.

“They play fast, they’re aggressive and they play defense, so we’ve got to be ready for their attack defense,” Lewis said of Coleman’s Bulldogs. “They defend pretty well.”

The first District 21-5A game against Barbers Hill on Jan. 3 is fast approaching, and the Gamble Classic will be one of the Titans’ final tests on their road to reclaiming the state title.

It was the first time in the 45-year history of the Bulldog Classic that Nederland won its own tournament. The... read more