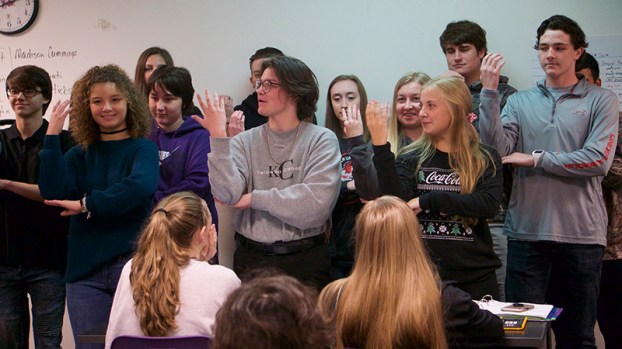 PORT NECHES — Port Neches-Groves High School added another language skills class to its curriculum — American Sign Language. The program, which started lasted year, has grown to include ASL I and II.

Brittany Cozad said when the opportunity to be a new ASL teacher presented itself and included kick-starting the new sign language classes, it was an offer she couldn’t refuse.

“I took ASL when I was in high school and I fell in love with the language and the culture,” she said. “I came to Lamar to major in sign language and when I applied for this job last year, I got it.”

Cozad said the classes not only learn how to sign, but are taught proper vocabulary and grammar.

“We learn a lot about deaf culture,” she said. “We learn about historical events that happened in the deaf community. We do different projects where they have to use their own dialogue and use signs to communicate with each other.” 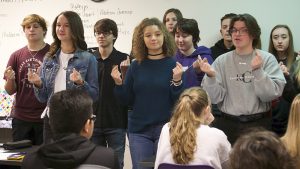 ASL II students at Port Neches-Groves High School toured the school caroling “All I Want for Christmas is You.”

“I think it’s important because people don’t realize how often they come in to contact with other people in the deaf community,” she said. “It definitely makes a deaf person’s day when they don’t have to worry about that language barrier. They go their whole lives worrying about the barriers and trying to figure out ways to communicate with us. So when they go to Dairy Queen or something like that and the person does know how to sign, it makes their whole day.”

The students’ response to the class has been phenomenal, Cozad said and her classes often fill up quickly.

Sophomore Libbie Guidry joined as a freshman last year after spending time with her cousin, who is a speech pathology major in college.

“I just love the language itself and if I ever come across the opportunity to speak with someone who is deaf and does ASL, that would just be incredible to be able to communicate with them,” she said.

“When I was in elementary school they had the signs for ABCs in the back of the dictionaries,” she said. “So a few other kids and I would learn the ABCs and practice it on the playground like it was a secret language only we knew.

“Then in high school, I had originally signed up for Spanish but when I heard that ASL was starting I emailed the counselor and told her I wanted to switch. I just think it’s the coolest thing ever. You don’t have to actually talk. You can see what you’re saying. There’s no hidden meaning behind it.”

Senior Wyatt Curry said he’s had amazing opportunities to connect with the deaf community and hopes to continue learning the language so he can use it in college as a theater arts major.

“I went to a cat café in Austin and this woman walks in with her girlfriend and she’s signing,” he said. “She is leaning in next to this cat, trying to give him food and I signed ‘He’s hungry.’ She jumped up and was so excited that I knew sign language. She and I ended up having this 30-minute talk and it was so sweet to see her day was made just because I said ‘He’s hungry.’

“My whole life I have wanted to make everyone feel included. Inclusion is a big part of my life and making sure that everyone has an equal opportunity to communicate and be friends is amazing.”

PORT NECHES — Jacorion Randle and Armando Ruiz will be will be guest speakers at the ballot positioning of candidates... read more