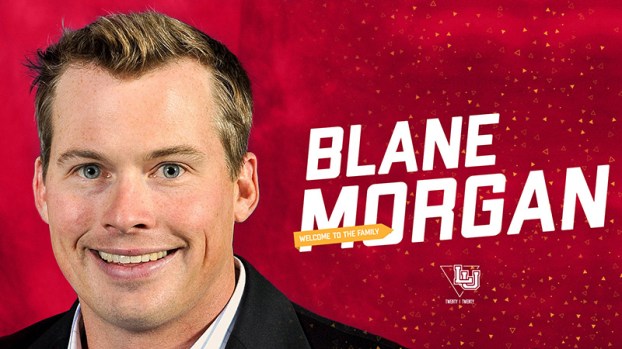 Blane Morgan has been named the Lamar University head coach.

BEAUMONT – Former Air Force offensive coordinator and most recently San Diego State quarterbacks’ coach, Blane Morgan, has been named as Lamar University head coach announced LU Director of Athletics Marco Born Thursday afternoon. One of the top rising stars in football coaching, Morgan becomes the third Cardinals’ head coach since the program’s return to the field in 2010, and just the 10th since transitioning to four-year status.

“We are very excited to announce Blane Morgan as our next head coach,” said Born. “Blane has coached at the highest levels of college football and brings with him a wealth of experience. He is one of the top young coaches in the game and we’re honored to bring him and his family to Beaumont.

“Blane has helped produce some of the nation’s most explosive offenses both at Air Force and San Diego State and comes to us highly recommended. When we began this process there were several criteria that we wanted in our next head coach, and Blane meets all those expectations. I’m very excited about the future of Lamar Cardinals football under Blane’s direction,” added Born.

A direct disciple of three legendary coaches – Rocky Long, Fisher DeBerry and Troy Calhoun – Long left New Mexico as the school’s all-time winningest coach and now serves as the head coach at San Diego State, while DeBerry is a member of the College Football Hall of Fame and retired as the all-time winningest coach at the Air Force Academy. Calhoun has nearly 100 career wins in 13 seasons with the USAFA. Among his 13 seasons with Air Force, Calhoun has guided the Falcons to nine bowl game appearances.

A coach with nearly 20 years of experience, Morgan has spent the previous five seasons at San Diego State helping turn the Aztecs into a national power. Once considered a conference also-ran, SDSU has experienced some of the best results in program history during Morgan’s time on staff. Over the course of the past five seasons, SDSU has recorded a 48-18 (.727) overall record including five bowl game appearances, posting a 2-2 (.500) mark in those games. That five-year stretch has produced two 11-wins seasons, a 10-win campaign and two Mountain West Conference championships.

The Aztecs will face Central Michigan in the New Mexico Bowl on Dec. 21st.

Under Morgan’s guidance, the Aztec signal-callers ranked second in the Mountain West, and 12th nationally, in 2018 averaging nearly 15 pass yards per completion. In addition, Morgan oversaw the development of quarterback Ryan Agnew who posted a 6-1 record in seven starts and owned the sixth-highest win percentage nationally among all returning starters with a minimum of seven starts in 2019. Agnew has continued that production this season by guiding the Aztecs back to the postseason with a 9-3 (.750) overall record. This season, Agnew has completed nearly 64 percent of his passes for 2,175 yards and 11 touchdowns. He’s also rushed for 120 yards and a score.

“I am very excited, honored and humbled to be the next head football coach at Lamar University,” said Morgan. “I want to thank Dr. Evans, Marco Born and the search committee for this tremendous opportunity. The visionary leadership is remarkable and something Lamar faithful should be proud of. Our family is thrilled to be back home in Texas and we can’t wait to make Southeast Texas and the Golden Triangle our home. We are already at work building a program that everyone associated with Lamar football will be proud to call their own. Go Cards.”

Morgan joined the San Diego State staff after a highly successful run at the Air Force Academy where he spent 13 seasons, including the final eight as offensive coordinator. During that stretch, the Falcons posted a 59-44 (.573) overall record, a run that included two nine-win seasons and a 10-win campaign. The Falcons also made seven Bowl appearances during that time posting a 3-4 postseason record.

All told, Morgan has helped take his teams to 12 bowl game appearances in the past 13 seasons.

Air Force’s offense excelled under Morgan’s direction. The Falcons’ 2011 squad set a single-season school record by scoring 454 points and finished third all-time in program history in rushing touchdowns (43) and fourth in passing TDs (16). The team’s 60.3 completion percentage was the second-best mark in program history. The Falcons offense received national recognition being ranked as high as 24th nationally in passing efficiency and third in yards per completion.

A native of Addison, Texas, Morgan returns to the state where he has spent the majority of his time as a recruiter. Morgan recruited the state of Texas for both Air Force and SDSU, and the current Aztec roster bears witness to his work on the recruiting trail. The Aztecs boast of 12 players from the Lone Star State, including seven on the most recent depth chart. Among those seven is the current starting quarterback – Ryan Agnew (Southlake, Texas).

There is a longstanding love affair with the game of football in the Morgan family. Blane, originally born in Nacogdoches, Texas, played for his father, Barry, at Trinity Christian Academy in Addison. Morgan would go on to play his collegiate football at Air Force. He followed in his brother Beau’s footsteps serving as the starting quarterback at both schools.

What They’re Saying About Blane Morgan

“Blane has been a key part of our 48-18 record over the past five years. He understands what it takes to win and is a proven winner. He’s gotten the most out of his players, and their consistent play is a big reason for our two conference championships since he’s been here. He should make an outstanding head coach.”

“Blane Morgan is going to be a great college head coach! He was a tremendous quarterback as a player and was one of the most competitive players and coaches that we had in the program at the Air Force Academy. Being the son of a great and very successful high school coach, and also being on the staff of one of the nation’s premier defensive coaches in the college game makes him well qualified and ready for this responsible job. He will be a great role model and mentor to the players! Players and supporters will love his beautiful family and they will be inspired by his leadership. Lamar University has found a nugget.”

“In Blane Morgan and his family, Lamar is getting a first class leader that bleeds for their home state of Texas. He’s a superb coach and will be a tremendous representative of the university.”

“I’m so excited to see Blane Morgan become the next head coach at Lamar University. I got to know Blane when he recruited my players at Cedar Hill High School. He is one of the best I have been around. He has great energy and is so passionate about helping young men develop into men. Lamar got a great one!”

“Blane Morgan is one of the most intelligent coaches in all of college football. He is a great person, family man and Texan. This is a terrific get for Lamar University.

“Lamar University has made a terrific hire in Blane Morgan and his wonderful family. He is first class and has learned from some of the best in Fisher DeBerry, Troy Calhoun and Rocky Long. He has been a winner everywhere he has been as a player and coach, and more importantly, he will make the Lamar football players winners in life. He has always done a terrific job recruiting in the state of Texas.”

“Blane is detailed, hard-working and a winner! He always brings energy every single day that is contagious, and he cares and loves his players like they are his own family.”

The slow start to the Lamar State Seahawks’ season is a matter of attitude, Memorial High School graduate and Lamar... read more