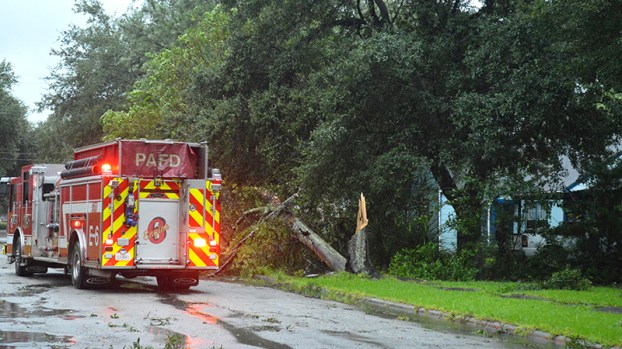 A Port Arthur fire truck is operated as Hurricane Harvey brings rain to the city on Aug. 28, 2017. (Mary Meaux/The News)

Jefferson County teams with other counties for flood control

BEAUMONT — It’s better to work together than against each other and that’s what Jefferson County and some surrounding counties are doing when it comes to flood control.

The District will function as a local government corporation, Jefferson County Judge Jeff Branick said, with a board consisting of county judges then have technical and engineering subcommittees made up of engineers with the drainage districts, river authority and possibly some independent consulting engineers. 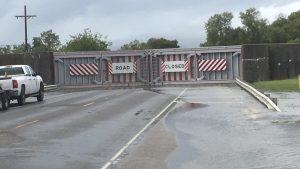 There is anticipation that a significant amount of money is coming from the Texas General Land Office to do river basin studies and identify projects that will help fight flooding across the counties.

Branick said preliminary seed money will be used in kick starting the district — based on taxable values.

“Jefferson County will kick in $25,000, and we will look at the total levy of each county,” Branick said.

For example, if Jefferson County’s values are $60 million and Orange County is $30 million then they would pay half of the $25,000.

Commissioner Pct. 2 Brent Weaver said, as he understands it, the idea is to get some projects in the engineering and planning stages so when state or federal funding comes available there will be shovel ready projects ready to be submitted in the applications.

Closer to home Weaver said he would like to see good communication and cooperation from all drainage districts, counties and Texas Department of Transportation as the issue moves forward.

Some of the smaller projects he would like to see addressed include cleaning out drainage district outfalls and highway ditches, which are the arteries where the water moves to the bayous and beyond.

Commissioners are also waiting for a hydrographical survey that takes in parts of Nederland and its unincorporated areas to come from Jefferson County Drainage District No. 7 that will show will areas that need to be dredged.

“Equally, I would like to see the bayous dredged, that would make sense to see them dredged after all of these storms. There has to be some sediment and silting built up in our bayous and channels,” Weaver said.

Weaver looked at the drainage simply, from the bottom up. All of the water drains to the Gulf of Mexico either through the river or bayous. The bayous — Taylors, Hillebrandt and Rodair, meet at the joint outfall by Texas 73.

Weaver said he was always told to start downstream and work your way up because doing improvements upstream first would cause problems downstream.

PORT NECHES — The Port Neches riverfront is set for a makeover, a commercial development makeover, that is. Port Neches... read more