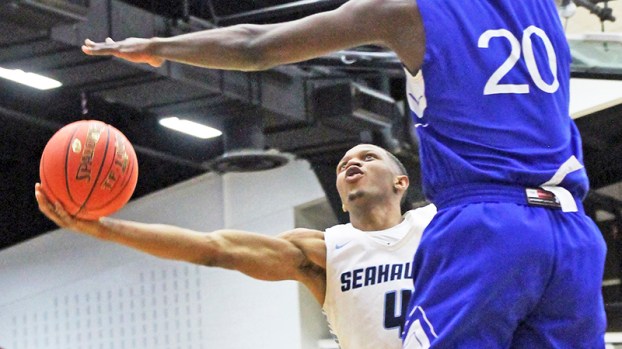 “No. 1, we have to fix the attitude of the team,” Chatman said. “A lot of the things going on with us are more mental than physical or just on the basketball court. I feel like we need to get more of a mental understanding of what’s going on so we can all come together, get over this hump and get back to winning games like we used to.”

He has his own obstacles to overcome in this regard too, learning to play less aggressively, getting back into his groove from last season and stepping up into a leadership.

“I was more mentally prepared last year,” he said. “This year it’s a mental lapse. I’m telling you, the whole team is having a mental lapse, but I think we’re getting back into our groove.”

Chatman is averaging 6.7 points and 2.6 rebounds per game. He recorded 10 points and 10 rebounds against Panola College, which defeated the Seahawks 85-52 on Saturday.

Head coach Lance Madison said he saw some great basketball from Chatman against Panola, and he’s talked with the sophomore about showing more leadership.

“He’s still trying to find his way a little bit,” Madison said. “I thought he played well against Panola. I thought he competed and played hard. He had an edge to him a little bit, and we want him to continue to play good basketball for us.”

For Chatman, who as a 6-foot-3 player, used his size to dominate in high school basketball, the college level has some real challenges to throw at him, from bigger opponents to a faster pace. Madison has Chatman playing as a combo guard and a small forward.

“On the court I could say that I’m understanding the game more from a different position,” Chatman said. “I played point guard in high school, and it was a big change in my freshman year but now I’m a sophomore. I’m getting more understanding and the game’s slowing down for me.”

“He’s kind of a tweener,” Madison said. “He really doesn’t have a true position. He plays hard, he’s physical, he’s got a good feel of the game sometimes, and sometimes he forces stuff instead of letting the game come to him. He’s stayed away from fouls and is playing solid basketball.”

Chatman hopes that he, Jamyus Jones and a few other players whose homes are close might be able to practice a little bit over the Christmas break as he tries to get more comfortable as a team leader.

“I need to shoot more, I need to cut down on my turnovers, I need to average more rebounds and I need to be a better leader for the team,” he said. “We’ve got a lot of young guys looking up at me so I’ve just got to pick it back up to where I was last year.”

The Seahawks return to basketball practice on Dec. 26 to get ready for the Seahawks New Year’s Classic on Dec. 30 and 31. There’s work to be done, but Chatman is confident that the Seahawks will have a better handle by the time the tournament rolls around.

“We’re going to most definitely be ready for that because everybody’s going to be back in time to where we can get those mental lapses out of our game,” he said. “Everybody can talk, sit down, figure out what’s going on with each other. I think we’ll be ready.

Tyler Jackson started basketball in seventh grade and began playing for his school in eighth, only a few years ago.... read more