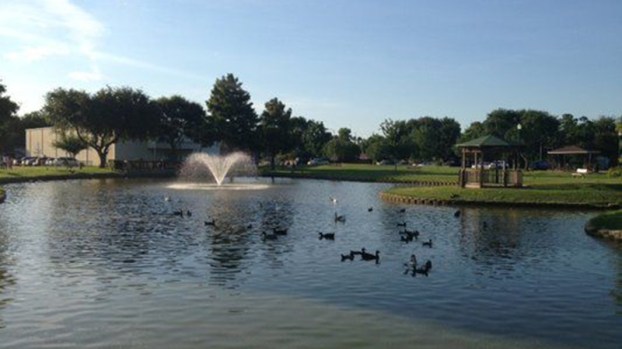 Nederland City Council members reduced the public-use hours at Doornbos Park, pictured, and all other parks in the city.

Safety concerns lead to cut in hours at Nederland parks

NEDERLAND — Parks access across Nederland is being reduced by as much as two hours to increase safety during nighttime hours.

From November through March, parks will be open from 6 a.m. to 9 p.m.

Although not addressed specifically during Monday’s council meeting, city leaders and police officials previously told The Port Arthur News the reduction in hours followed an increase in violent crime reported in November at Doornbos Park, where separate incidents included two people shot and an assault on a patron walking with a service dog.

With a new ordinance in place, Police Chief Gary Porter said violators face a misdemeanor charge if they are found in the park after hours.

In addition, authorities said officers have increased patrols in and around Doornbos Park.

City Manager Chris Duque added that a move to increase lighting at the park is nearly complete.

Duque also said the city is working with the Nederland Independent School District and local utility companies to determine where property boundaries reach in a effort to erect more fencing around the park.

Duque said the action was spurred by the recent discovery of an outdoor living camp on Highway 365 behind RaceWay gas station.

The no camping designation is targeted at the growing homeless and vagrant population that Duque said has been at its highest locally since Hurricane Harvey.

Nederland officials said they are willing to work with any church or homeless-advocacy organization that believes more can be done for the homeless population.

During discussion on the camping ordinance, a meeting attendee said there was an outdoor living camp set up behind a shopping center in the 1400 block of U.S. 69.

Duque said the new ordinance allows authorities to clear any illegal camps that mimic “living conditions” because they pose a health threat and nuisance.

Juan Esparza of Groves paints a basketball player in the colors of the Port Neches Groves Indians on a utility... read more