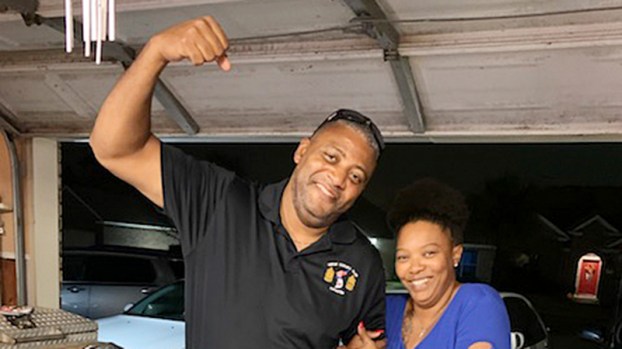 When Robert Caddy III stood in a room full of family members and loved ones last week in Port Arthur, he had one simple message: Thank you.

The Stephen F. Austin High School graduate joined the military as a teenager, served all over the world and found himself in numerous life-threatening situations.

More than two full years in a war-torn Iraq can do that.

“As I look back on those times that were very grave, I knew it was because of those people including me in their prayers that I was able to make it through times where I even doubted myself and my own ability of being able to make it,” Caddy said.

Caddy survived his tours in Iraq, rose to the rank of Command Sergeant Major, raised two daughters with wife Stephanie, who also served, and recently announced his military retirement after 30 years.

His awards and decorations include the Bronze Star Medal and the Meritorious Service Medal with four Oak Leaf Cluster.

Those accomplishments and many more led to a Thanksgiving Day celebration of Caddy by his family in Port Arthur, organized by his mother, Lemuriel Sinegal.

Caddy used the opportunity for reflection and thanks.

He spent 25 months of deployment time walking around Iraq, saying there wasn’t a day that went by that he didn’t think about the possibility it could be his last day on Earth.

It’s a long time to ponder the possibility of not coming back home.

“It’s something you come to grips with,” he said. “You have been told if you do what you have been trained, typically situations tip in your favor in terms of your actions on the battlefields. In the end, you have to trust God is on your side and prayers your family put in place help you make it through each and every one of those hard days. The only way this old soldier made it through all those years was because a lot of people prayed for me.” 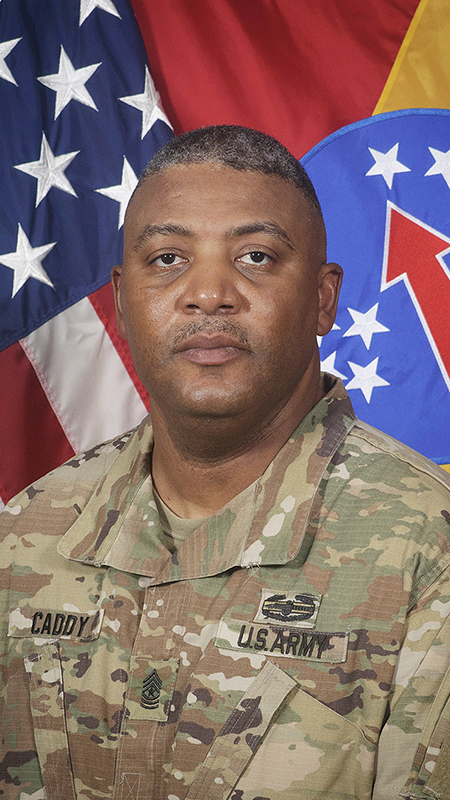 Caddy ranked fifth in his class upon high school graduation. He parlayed those marks into an opportunity at Lamar University, studying in the engineering program.

However, he admits, poor decision making followed, all but ruining his first semester.

More importantly, Caddy let down his mom, a deeply faithful woman who committed plenty to her family.

“I decided to get my head right and get some discipline,” Caddy said. “One day I walked by a (U.S. Army) recruiter’s office. I thought if I’m going to finish school, I’m going to do this on my own. I’m not going to waste any more of my mom’s money.”

The only things he left with were the clothes on his back and a small gym bag with another set of clothes.

A look back to his mother showed Sinegal’s eyes filled with tears.

She eventually dropped to her knees that morning, praying for hours.

When he arrived at headquarters, the human resources clerk was the first person that engaged him. Her name was Stephanie and part of her responsibilities was to receive new soldiers who just arrived.

She was homesick at the time, recently complaining to her family that Army life was lonely. Her mom told Stephanie she was about to meet her husband. The day predicted was Feb. 11, 1991 — the day Caddy walked into her office.

They were good soldiers, ones the Army put a lot of trust and responsibility in. They were supported by family, earning their educations and raising beautiful daughters.

They made the commitment to pursue military careers.

Stephanie retired after 26 years and now works as a civilian employee under a similar role as her previous Army responsibilities.

Caddy is looking to follow in those footsteps early next year.

From October 2014 until October of this year, Stephanie worked as a civilian while Caddy completed his military career in Texas and Hawaii.

Caddy describes his assignment at Ft. Hood as the most important assignment he was given, serving as a command sergeant major of the field artillery squadron, part of the 3rd Calvary regiment.

“That was probably my most rewarding two years in the Army because I had the daily responsibility of the life, training and welfare of the families and soldiers of over 600 assigned to that organization,” Caddy said. “It was very exhausting on a daily basis and very challenging, but I thank God. He gave me the ability. With a lot of prayer and my family, I was able to finish the two years required of that assignment. It was very rewarding.”

Caddy closed out his time in Hawaii, adding how phone FaceTime was super important because it allowed him to see the faces of those he loved so much.

“Just joining the service and spending any length of time brings you to a new level of life experience,” Caddy said. “Having gone through 30 years of being in the military, specifically the Army, you tend to go through a lot and see a lot. You see a lot of great things and you also see a lot of terrible things.”

Through it all, family and faith kept him safe.