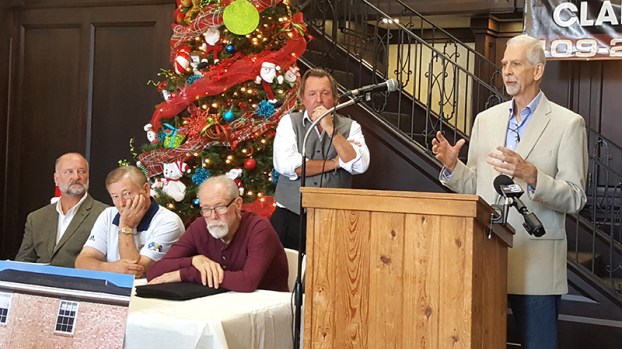 Mike Sawyer, a chief process safety management expert, right, speaks to media during a press conference on the TPC Group disaster at the law firm of Brent Coon & Associates in Beaumont on Friday. (Mary Meaux/The News)

BEAUMONT — The Nov. 27 explosion at TPC Group in Port Neches was preventable and likely due to an an old facility that lacked proper maintenance, according to information presented at the Brent Coon & Associates Law Firm on Friday.

Coon is representing upwards of 1,000 clients in a class action suit against the plant as well as a suit representing the widow and family of Trent Fontenot, who they contend died of a heart attack in relation to the explosion.

Mike Sawyer, touted as a chief process safety management expert, said butadiene is notoriously problematic and if the inhibitor used with it is not at the right concentration, right temperature or pressure it can form a popcorn like structure.

This structure can coat lines and valves, particularly relief valves, which is a major problem in a plant. This can cause a blockage where only a small amount of material can flow through, leading to several problems including the build up of pressure in the line.

“One of the things we do know is this was a problem they were having for a number of months,” Brent Coon said.

Earlier this week the U.S. Chemical Safety and Hazard Investigation Board announced the explosion was caused by a vapor cloud that was ignited.

The immediate surge of liquid that formed into the vapor cloud combusted when it hit oxygen. The cloud is believed to have been as big as a football field.

The few workers on shift that night likely outran the vapor cloud before it ignited.

Sawyer agreed, saying the explosion was totally preventable and more than likely maintenance was deferred and various process safety elements were neglected or left in a deficient level.

The Nov. 27 explosion led to the mandatory evacuation of residents in a four-mile blast zone radius the day before Thanksgiving. The order was lifted Nov. 29 but followed by several shelter-in-place calls for residents in Port Neches as butadiene was detected outside the plant.

On Friday, small fires were identified in the impacted area on site that officials with the Unified Command called residual and anticipated, which were being contained.

The fire impacted 12 tanks on the site and there are plans to transfer the remaining materials from the site, based on mechanical integrity inspections of the tank.

BEAUMONT — In the early morning hours of Nov. 27, Trent and Darlene Fontenot were awakened by the explosion at... read more