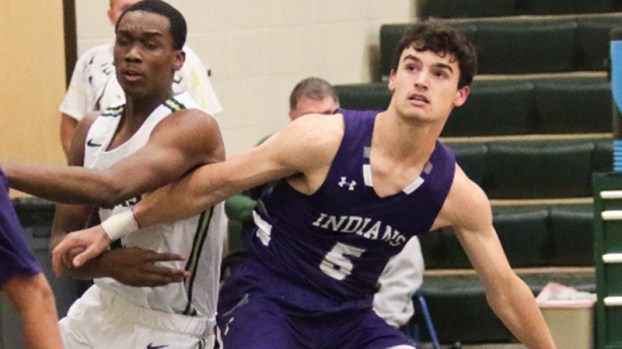 Khristian Curtis plays against Little Cypress-Mauriceville during their Nov. 19 game at Mauriceville. PNG won 55-50 and Curtis made 12 points and 10 rebounds. (Courtesy photo)

Baseball is what he loves and that’s what he’s going to do in college, but not before playing one more year of basketball.

The 6-5 senior came back to the court for the Port Neches-Groves Indians after taking a break his junior year. That year he didn’t want to risk injury playing in another sport before making it to A&M.

The court continued to pull at him though.

“I just missed it in general,” Curtis said. “I missed playing with all my teammates that I’ve played with ever since I moved back to Texas from Tennessee. I just wanted to play again. I would go to the games and watch it and regret not playing.”
Senior year comes for Curtis, and during the first week of school he gave, maybe unwittingly, a little demonstration of what he could do with a basketball one day in the gym. Head basketball coach Chris Smith noticed.

“Khristian grabbed the ball, took two steps and dunked it, and I said ‘Welcome to the basketball team!’” Smith said. “He just smiled because that’s what he does. He’s a good kid, he smiles all the time.”

But that’s all Curtis did afterward. Smith let it go.

Soon there were rumblings around the school that Curtis was seriously considering playing basketball again. Smith heard the rumors but Curtis never approached him about it. Smith stopped Curtis in the hallway and asked to see him after school.

“I told him, ‘I wouldn’t be doing my job as a coach not trying to get the best kids out there to play. I know you haven’t played in a while but you were on the varsity team your freshman and sophomore years so I know you can play,’” Smith said.

Smith offered to work with baseball coach Scott Carter to get Curtis to give basketball a try, just to see if he liked it. If he didn’t, he can go back to baseball, no hard feelings.

Curtis has been with the basketball team ever since.

“When I committed to Texas A&M for baseball I didn’t want to take a chance on getting hurt and messing up my baseball,” Curtis said. “Me and my parents sat down and talked and we came to the conclusion that I wanted to play basketball again.”

After all, basketball will help keep him in shape until baseball starts. Curtis said it will also help him with conditioning and his footwork.

Curtis did take off a whole year, so it will take work to get back into a rhythm.

“His footwork is probably not where it should be if he’d been with us all year, but each day he works hard, gets better and hopefully we can get him going by district,” Smith said. “With the work that he puts in, it just shows with the stats.”

Those stats include 23 points and 12 rebounds in Tuesday’s 65-58 win against Kountze, along with 12 and 10 in the 55-50 win against Little Cypress-Mauriceville. That’s after having taking a year off, and those were the only two games he’s played so far this year.

“He missed over Thanksgiving break,” Smith said. “He had to go to Tennessee for family, so he missed the three games over the break. With him playing baseball, not knowing that he was going to play basketball, they already had plans so I told him don’t worry about it. We’re just trying to get games under his belt and get him to start peaking at district.”

With just what he’s played, Smith says Curtis has nonetheless been a real presence in the paint rebounding and blocking shots.

Due to the shelter-in-place issued in Port Neches in the wake of the TPC Group plant explosion, the Indians weren’t able to play any games in the Nederland Tournament on Thursday. They will make up for it today, playing Dallas Kimball at 9 a.m. at the Montagne Center in Beaumont and Mississippi’s Grace Prep at 4:30 p.m. in the dome gym at Nederland High School.

NEDERLAND — The basketball season arrived and teams are getting in valuable floor minutes for their still-developing teams. Nederland is... read more