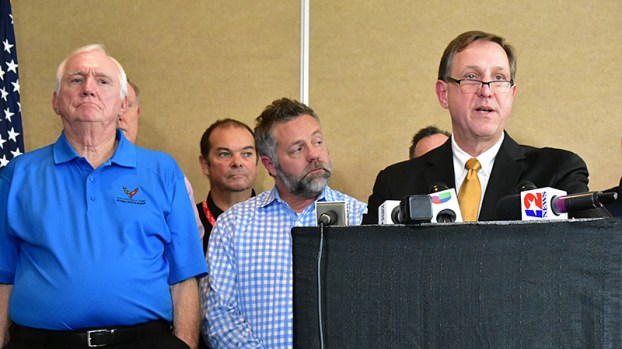 BEAUMONT — A release of process fluid within the TPC Group Port Neches Operations facility led to a vapor cloud that was ignited, causing an initial explosion on Nov. 27, a member of the U.S. Chemical Safety and Hazard Investigation Board (CSB) said Thursday.

The effects of what turned out to be two explosions that day led to shelter-in-place and evacuation orders in the eight days that followed. The cause of the second explosion is still under investigation.

“At about 1 a.m., three people were working on equipment in the TPC facility and witnessed the loss of containment of process fluid,” CSB member Manny Ehrlich said. “The released process fluid created a large vapor cloud. The workers recognized the significance of the release and immediately evacuated the area. Shortly after, the vapor cloud ignited, causing a massive explosion.”

Ehrlich spoke during a news conference Thursday at the Holiday Inn Beaumont-Plaza. That was followed by another conference that included Jefferson County Judge Jeff Branick, TPC officials and State Rep. Dade Phelan (R-Beaumont).

“We will conduct a thorough and transparent investigation into this incident,” Ehrlich said. “More importantly, we will share the lessons learned with the entire industry and nation to ensure we don’t see this type of catastrophic failure again.”

Jason Sanders, environmental manager at TPC’s Houston facility, stopped short of answering a question about whether TPC accepted that the vapor cloud was a result of a fundamental failure in the system.

“I think what TPC wants to do is have great faith in the CSB process,” Sanders said. “I think we are not trying to assume any ideas about what the cause was. I think the CSB is there to thoroughly investigate what happened, and I think we need to trust their process and allow them to follow through their processes because they can do a fantastic job of finding the root cause.” 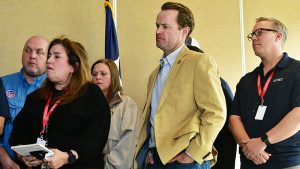 TPC is planning a removal of products from the Port Neches site to allow for damage assessment, but Sanders said where the products will be stored — TPC’s related facilities in Houston and Lake Charles are options — has not been determined. Product removal will take weeks.

Branick said TPC has added inhibitors to the affected tanks to make sure no reactions within the vessels occur while making plans to move the products off-site.

The news conferences were held shortly after the city of Port Neches and Branick lifted shelter-in-place and voluntary evacuation declarations. Elevated levels of 1,3-Butadiene were the reason both orders were put in place Wednesday evening.

Branick said he was viewing surveillance video of Tank 25 at with TPC Group fire Chief Scott McDonald on Tuesday and could see vapors coming off a pressure release valve at the top of the tower. While air quality tests came up with a reading at the location, Branick said no signs of chemicals that reached 0.5 parts per million were detected.

But on Wednesday, a strike team verified hits from air quality tests.

“The pressure relief valve on Tank 25 was leaking butadiene into the atmosphere despite efforts to focus water flow on it to knock down the vapors.”

Responders closed a leaking pressure relief valve determined to be the source of elevated butadiene readings. Air monitoring then showed significant reduction of butadiene levels, according to a news release.

Butadiene amounts of almost 1 ppm may lead to human irritation, but Angie Perez, toxicologist with environmental response firm CTEH, cited acute emergency guidance levels from the Environmental Protection Agency when mentioning a Level 1 emergency level of 670 ppm, not based on long-term irreversible health effects but irritant effects such as watering eyes and scratchy throat.

“Butadiene has a low odor threshold, so you can smell it at levels that are not a human health concern,” she said. “It’s up to the hundreds of ppm when you start to see adverse effects.”

Port Neches Mayor Glenn Johnson showed a different side of irritation over rumors about the TPC incident on social media and asked his constituents to visit official websites for information, including portnechesresponse.com and response.epa.gov/south4groupfire.