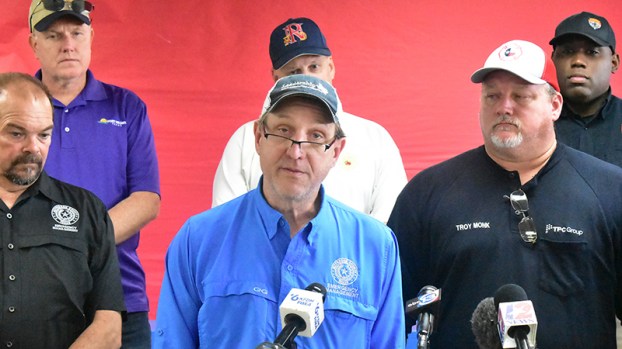 Judge Branick: Air not a danger; evacuation order still in place on Thursday

PORT NECHES — The air quality in the area surrounding the TPC Group chemical plant in Port Neches is safe, and the plume of smoke floating from the plant is not likely to cause harm to individuals, Jefferson County Judge Jeff Branick said Thursday.

The evacuation order Branick signed at 3:28 p.m. Wednesday is still in effect, however. The order, which impacts Nederland, Port Neches, Groves and a northeast portion of Port Arthur, called for residents within a 4-mile radius of the plant, to take shelter elsewhere.

The order was made in “consideration of a blast area if one of the towers goes into the tank area.” TPC first exploded at 1 a.m. Wednesday and again just before 2 p.m. that day, prompting the evacuation.

The explosion at 1 a.m. occurred in the South Processing Unit at a tank with finished butadiene, TPC said on its website. Two full-time workers and a contractor were injured, but all have been treated and released.

TPC has not posted details on the explosion at 2 p.m.

TPC said the cause of either explosion has not been determined, but added affected products include purchased crude C4s and processed 1,3 butadiene and raffinate. Butadiene is used in the production of synthetic rubber used for tires and automobile hoses.

An individual contractor from Houston has been stationing air monitoring data systems across the county, Branick said, to gather more details about the air quality. Branick was meeting with leaders of first responders and emergency management for updates before determining whether the evacuation can be lifted. Branick did not offer a timeline for a possible lift.

Ford Park in Beaumont has been offered as a temporary shelter for evacuees, as previous shelter First Baptist Church of Nederland is located within the evacuation radius.

BEAUMONT — Ford Park in Beaumont opened at 6 p.m. Wednesday as a shelter for people in the mandatory evacuation... read more