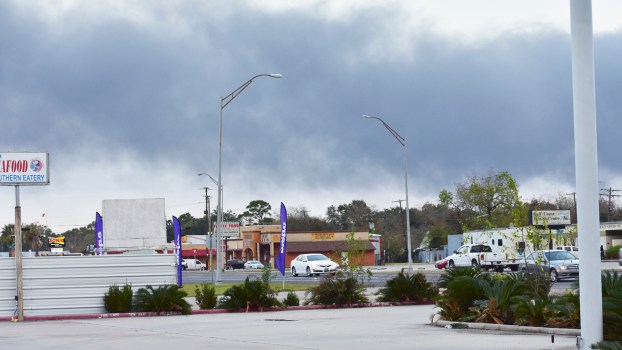 A plume of smoke floats southward from Port Neches at about 7:15 a.m. Wednesday and is seen from the front of The Port Arthur News office on Memorial Boulevard. (I.C. Murrell/The News) 11-27-19

Shelter-in-place for PA residents lifted; environmental activist asks ‘How do you minimize exposure?’

The city of Port Arthur lifted a shelter-in-place for residents who live north of Texas Highway 73 at noon Wednesday.

The shelter-in-place was issued at 8 a.m., approximately seven hours after an explosion involving a processing unit occurred at the TPC Group plant on Texas Highway 136 Spur in Port Neches.

A thick plume of smoke was still streaming southward from the location of the explosion.

Port Arthur City Manager Ron Burton said the shelter-in-place was a precautionary measure and not the result of any imminent danger to local residents.

“Not at this point,” Burton said. “I think we are in pretty good shape. We are just taking precautionary measures if anything escalates to make sure the citizens are protected.”

Burton said Port Arthur has not sustained any noticeable damage from the shockwaves of the explosion.

John Beard, a Port Arthur environmental activist with 38 years of experience in the petrochemical industry, said facilities like TPC should take an inventory of every substance so a cause can be identified.

“More so than that, what are they going to do to get the fire to stop burning?” Beard said. “What is the substance? How are we going to put out this fire? How will emergency management in Port Arthur react to this? How do you minimize exposure to the people? A shelter-in-place may not be enough.”

TPC had not yet announced a cause of the explosion, but said it has activated an Emergency Response Plan and requested assistance from the Port Neches Fire Department, Huntsman and Sabine Neches Chiefs Association.

Beard is concerned any potential warm weather could exacerbate any harmful chemicals in Port Arthur, where residents have complained of air quality from other refineries. Temperatures were forecast to remain below 70 degrees until Friday, when a high of 73 in Port Arthur is expected under mostly cloudy skies, according to the National Weather Service.

Wind from the northeast, east and southeast is forecast through Friday night.

“The wind is a good thing, but all it’s going to do is push it further downward,” Beard said. “We’ve got to get people in the downwind out of harm’s way. If that wind is blowing from west to east instead of north to south, those people across the river need to be concerned.”

The Texas Commission on Environmental Quality said it is conducting handheld air monitoring and providing information to Unified Command. TCEQ added it would provide updates through social media and its Emergency Response Webpage.

In a statement, TPC said emergency responders are still working “to bring the event under control” as quickly and safely as possible. “Teams have been dispatched to conduct air monitoring along the fence line of the facility and in surrounding neighborhoods through mutual aid,” it continued.

“… At this time, we cannot speak to the cause of the incident or the extent of damage, but TPC is assembling a team to conduct a full and thorough investigation.”

TPC has established a claims processing hotline for area residents impacted by the event: 866-601-5880.

TPC said it remains focused on protecting the safety of responders and the public as well as minimizing any impact to the environment. The company encourages area residents to stay tuned to information from Jefferson County Emergency Management and local responders.