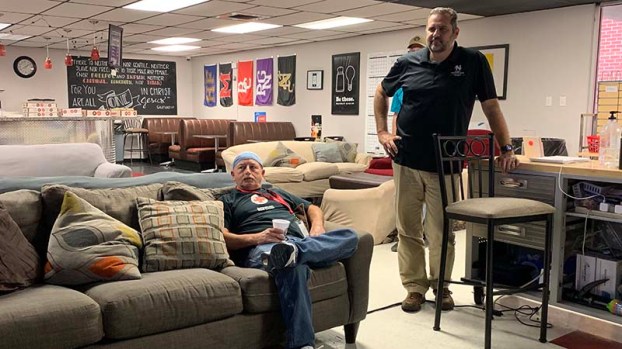 NEDERLAND — After the explosion at the TPC Group chemical plant in Port Neches early Wednesday, First Baptist Church of Nederland immediately responded by opening the doors to its student ministry as a shelter to evacuating residents.

Pastor Jason Burden opened the doors at approximately 1:45 a.m., only moments after the explosion sent shockwaves throughout Jefferson and Orange counties. The shock blew doors, windows and ceilings apart within miles of the plant.

“I got a call from our police department early this morning,” he said. “I got here a couple minutes before 2 a.m. to see if anyone would immediately come, and Red Cross showed up not too long after that. People started trickling in all throughout the morning till about 6 a.m.”
Burden said the church doors have been open through natural disasters like Hurricanes Katrina and Harvey and Tropical Storm Imelda.

“Hosting people in a time of crisis is our spiritual gift,” he said. “If you can have a spiritual gift like that, it’s really our ministry and our calling to the community.”

About 15-20 evacuees spent hours huddled in the church, which provided donuts, hot coffee and a place to rest.

Dennis Guidry, who lives within a half-mile of the Port Neches plant, said he immediately evacuated after the explosion caused extensive damage to his home. 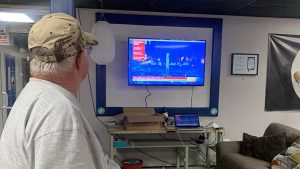 Guidry said his wife woke him up after the windows initially exploded around 1:30 a.m.

“There was glass all over the living room,” he said. “All my front windows, my door and two garage doors were pushed in. It was pretty bad.”

Guidry arrived at First Nederland around 2 a.m. after being advised to leave the town.

“We were looking for a place to go to, so we looked on Facebook and found this place,” he said. “We came here and they have been treating us like family since we’ve been here. ”

Along with evacuees, a handful of EMTs and Red Cross responders stopped at the church to refuel.

Red Cross Emergency Manager Chester Jourdan was coming off the first round of an eight-hour response shift to drink a well-deserved hot cup of coffee. Jourdan said he is glad to have a place to momentarily rest.

“Obviously, the biggest thing now is to make sure that folks have a safe and secure place to go until we figure out what is going to happen,” he said. “It has been uncertain because initially the plume went east.”

Jourdan, who has been on the phone with Jefferson County Judge Jeff Branick and Orange County Judge John Gothia, said as the shelter-in-places are being lifted they will begin assessing damage.

“If we need to go beyond temporary shelter we will extend it overnight,” he said. “We will start setting up cots. We are also in coordination with Shepherd’s Inn in Port Arthur. They have some facilities we will utilize as well if people are not able to get back into their home with their windows gone and things like that.”

Jourdan said the response from the local communities has been phenomenal.

“The community has been through a lot of disasters, but that means we have a lot of experience,” he said. “We train for this. We prepare for this. You don’t like to see these events happen but we know that our organizations, responders and managers are prepared.”

Thankful that there are no fatalities, Jourdan said they would begin the next steps in recovery.

First Nederland will remain open until all shelter in place notices have been lifted.

Shelter-in-place for PA residents lifted; environmental activist asks ‘How do you minimize exposure?’

The city of Port Arthur lifted a shelter-in-place for residents who live north of Texas Highway 73 at noon Wednesday.... read more