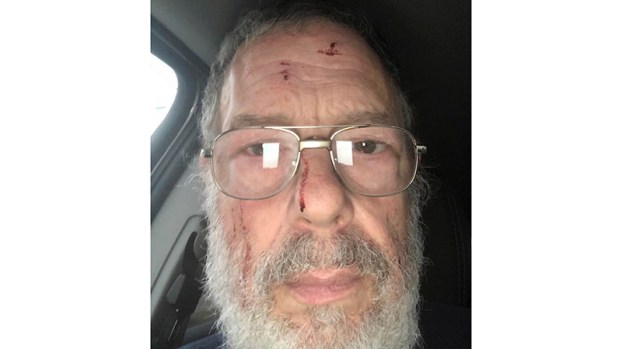 Kenneth Young ‘s visible injuries after he was attacked in an attempted robbery while walking at Doornbos Park on Saturday. (Courtesy photo)

NEDERLAND — Police in Nederland are looking for two men who attacked and attempted to rob a man walking at Doornbos Park over the weekend.

The victim, Kenneth Young of Nederland, said crimes like this are happening everywhere and could have happened in a store parking lot.

Young was walking with his service dog around 5:30 a.m. Saturday at the park, 2301 Ave. H, and was at a far end when he heard someone say they needed help but were not screaming. As he got closer he could hear it a second and third time.

“I looked real close and when I got to around the ball park I could see somebody laying in the grass,” Young said.

The area is a back corner where there is an opening in a fence by the park, where the back of Fellowship Baptist Church property and Hillcrest Elementary School property converge.

Young, who has numerous health issues, went down a ditch and “kind of leaned over” when a second man came from behind the fence holding a piece of conduit (pipe) and hit him above the right eye.

“The other guy jumped up and had a wooden stake that was broken and sharp at the end, like from a survey, and was poking me with it,” he said. 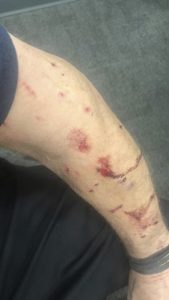 Kenneth Young ‘s visible injuries after he was attacked in an attempted robbery while walking at Doornbos Park on Saturday. (Courtesy photo) 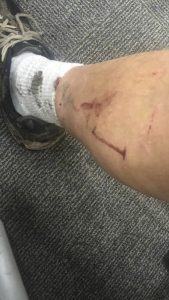 Then the second man grabbed his shorts and tried to pull them and go through his pockets. Young’s phone was in his service dog’s vest and the dog had run off when the attack occurred. After the attack, which lasted only minutes, the dog returned when Young called out to him. He got his phone and called police who were there within a matter of minutes.

“This is something that could have happened to me in Walmart parking lot,” he said, adding that he made a mistake when he went off the lighted path and did not pay attention to his surroundings.

Young was treated by emergency medical services and brought to the police station to make a report and was later brought to the hospital by his wife — he suffered cuts and bruises and said he may have an abdominal injury to an area where he has had numerous surgeries in the past.

Nederland Police Assistant Chief Andrew Arnold said it appears as if the two men set the victim up, adding this is the first time for something like this to happen.

The suspects are described as two white males in their 30s, both with dark hair and no facial hair, 5 feet, 7 inches to 5 feet, 10 inches. One was wearing a blood donation t-shirt and jeans and the other was wearing either a red or maroon shirt and jeans.

“Right now there are no suspects positively identified,” Arnold said. “Obviously we have our patrol officers out and beefed up security around the park area looking for somebody meeting the description and are still checking surveillance cameras in the area.”

Arnold said officers regularly patrol the park and they generally do not encounter transients there after the park is closed.

“Usually, what we find is people who go to do drugs or other inappropriate things,” he said.

The park is open from 5 a.m. to 10 p.m. daily and persons inside when the park is closed could face a violation of city ordinance.

Last week a 17-year-old and 18-year-old male were shot while at the back of Doornbos Park where they told police they went to meet some people. The shooting is under investigation.

Arnold said the two incidents are not related.

Individuals with information about either incident can call police at 409-722-4965 and choose the option to “speak to an officer.”

Tammy Gallardo is taking care of business on the court and in the classroom. The 17-year-old Bob Hope junior is... read more