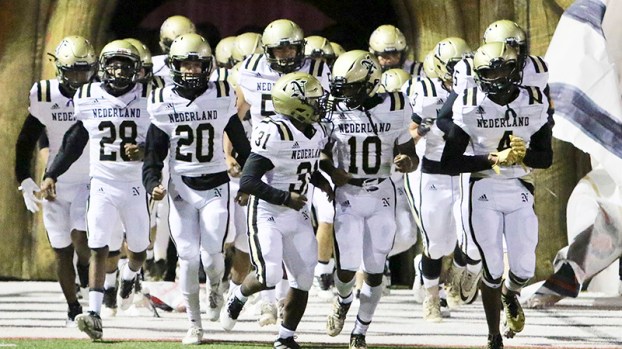 Nederland players take the field against Crosby on Nov. 1. (Michael Sudhalter/Special to The News)

There are some mixed feelings when, as a senior, one faces the prospect that the next snap on the football field could be your last.

“It could be your last snap, or you could go on to play college ball, you never know,” Logan Nguyen said. “It’s just a mix of emotions.”

“The feeling’s real,” Cedric Pete responded, “It’s a question of if you’re going to play again, knowing that that’s most likely your last game. It breaks you down.”

The two senior Nederland cornerbacks talked about their experience playing football for the Bulldogs and what’s going to happen for them now that the season is over. They came to their positions a little differently — Pete has played corner since middle school while Nguyen started as a running back, started playing corner as a freshman, briefly played as a safety, then stuck with corner the rest of his career.

They came into varsity still learning, but they kept their eyes open.

“I had to watch and learn from upperclassmen on how to carry myself and what things to do and what not to do to prepare myself for junior and senior year,” Pete said.

“You have to pay attention to real players playing real positions,” he said. “That really helped me. I got All-District my junior year just by looking at my older brothers playing.”

Both ended up becoming part of a senior class at Nederland that dedicated themselves to training and learning their crafts.

“This summer was one of our biggest summers as far as guys in the weight room continuing what they’d worked on all season,” head coach Monte Barrow said. “Our senior skill guys, led by Bryce [McMorris], got together during the summer and wanted to do some seven-on-seven, went to Houston for a few tournaments, and I think that really helped. I thought they did a great job of realizing what could help them with the season. All the extra things they did, I think, showed up during at a lot of points this season.”

Still, Nguyen and Pete had hoped for a little better from their senior year.

“We were average,” Nguyen said. “I feel like we could have done better in some things, but we have to move on.”

Nguyen will be moving on to track while Pete is starting basketball. At the end of the school year, both are hoping for some good college prospects.

“I’m looking for a scholarship right now,” Nguyen said. “I possibly could go to Texas A&M, but really any Texas school would do. There are some good options. If I went to UH, I would do dental and major in biology.”

They’ll take away from their experience splaying football, and playing as cornerbacks, an ability to see what’s around them and discern what’s important. Both agree football taught them how to focus.

“At corner, it’s a mindset,” Nguyen said. “You’ve got to pay attention to what’s going on, and that’s what helps.”

“It’s all about being able to be at different spots at once and being able to have different types of skill sets,” Pete said. “All at the same time you’ve got to watch where the ball’s going, know if you’ve got a man running the route or do any type of fakes. It’s the maturity to be able to know what you have to do at certain times.”

The common refrain from fellow seniors still applies, they said: Don’t take anything for granted.

“Go hard every play,” Pete said. “Every chance you get to buckle up, strap it. Everything comes to an end, but don’t take that for granted.”

Both Zane Hernandez and Santiago Agudelo gave, independently, the same advice to upcoming underclassmen: Don’t take anything for granted. “Give... read more