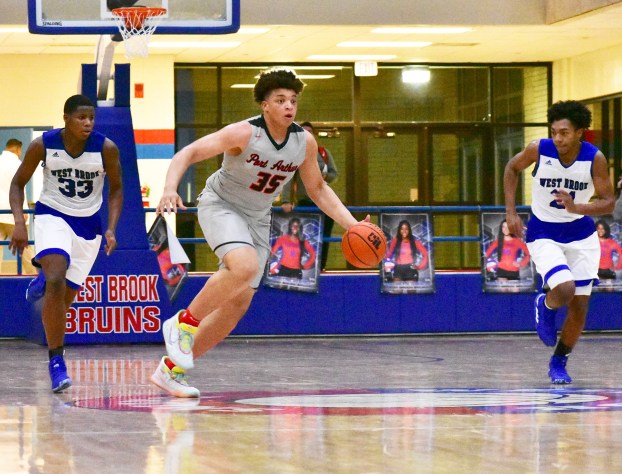 Memorial senior Kenneth Lofton Jr. pushes the ball up the court off a rebound against West Brook on Tuesday in Beaumont. (I.C. Murrell/The News) 11-19-19

The Memorial Titans are off to a good start.

The Titans have won their first two games, both on the road, against Westbury Christian and West Brook, but the pressure is still on to live up to all of the previous years’ successes.

“The season is going pretty good at the moment,” head coach Alden Lewis said. “We’ve got some things that we’ve got to clean up, but for the most part we’re moving forward.”

The next step will be at Silsbee against the Tigers, a game that was rescheduled for noon on Saturday.

So far this season, Silsbee lost its first game at La Marque, 96-92. The Titans are 2-0, but there’s no reason to doubt the skills of the Tigers.

“They like to play fast,” Lewis said. “I’m sure they’re going to press like they usually do. They’re normally a pressing team and fast, and they’re going to look to score points. We’re going to come out ready and ready to defend.”

Lewis thinks back-to-back road games got his team ready to face whatever adversity may come from Silsbee, since they were able to go into hostile environments and come back out with wins. He believes the Titans’ Tuesday game against West Brook served as a good warm up.

Sophomore Amaree Abram scored 20 for the Titans against West Brook. In last year’s Silsbee game he got the Titans six points while then-junior Nate Clover lead with 23.

Clover and Kenneth Lofton Jr., both returning seniors, were named to the Texas Association of Basketball Coaches 5A All-Region III team for last season. Silsbee also has 4A All-Region team members that returned this year in Jordyn Adams, Devon McCain and Braelon Bush.

Team chemistry and especially better execution will be what will continue Memorial’s success, Lewis says.

“We have to keep paying attention to detail and just executing and defending,” he said. “Hopefully, we could do that at a high level. If we do those two things, execute and defend at a high level, we’ll be very, very successful.

“Each game we get better and better, and hopefully it’ll pay off in the end and we’ll be good.”

NEDERLAND — Fourth-year varsity standout Hayden Hefner sat out of a Nederland basketball game for the first time in his... read more