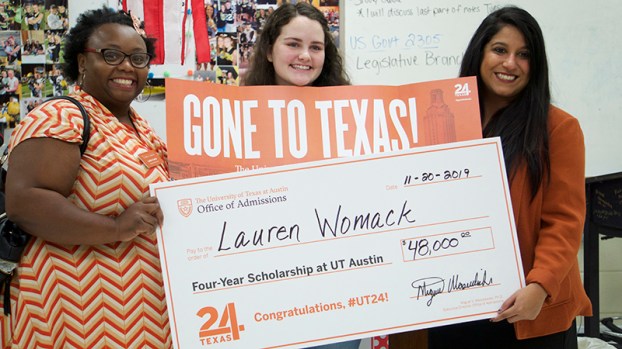 Representatives from the Houston admission center for the University of Texas at Austin, Letitia Carter, left, and Veronica Peña, right, present Nederland High School senior Lauren Womack, center, with a surprise $48,000 scholarship in November in class to attend the Moody College of Communications at UT. (Cassandra Jenkins/The News)

NEDERLAND — One Nederland High School senior received the surprise of her life in class Wednesday morning, and it wasn’t the government test that was seconds away from being passed out.

Lauren Womack, 17, was granted a $48,000 scholarship check to attend the school of her dreams — the University of Texas at Austin. 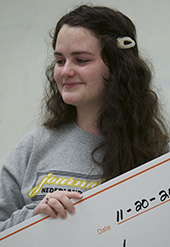 “I knew that I was going to go to UT, because that’s where I’ve wanted to go for all of high school,” Womack said. “I was stressed about money and scholarships, so this makes it a lot easier.”

Womack is the third person in the greater Houston area to receive the Impact Scholarship. Veronica Peña, a representative from the Houston admissions center for the university, said only 30 students across Texas are given this scholarship each year.

“Basically, we read thousands of student applications to the school and we pick what stands out to us,” she said. “We take a holistic approach and we saw some things in (Lauren’s) application that showed that she made an impact in her life, her community and the people around her. We just wanted to honor that and want her to come to UT and make that impact as well.”

“We like to surprise the students because it’s exciting,” Peña said. “We don’t give out too many of these, so it’s something we like to celebrate.”

Womack received a large check with the amount, as well as a Longhorn backpack and the famous “Gone to Texas” sign. She was accepted to the Moody College of Communications earlier this year and will attend UT next fall.

“I want to write for a newspaper,” she said. “Obviously the goal is to write for the New York Times or the Washington Post, but it takes time to work up.”

Right now, Womack is the editor-in-chief at the Bulldog Beat newspaper on campus, seventh in her class, a bright student and involved in other student activities and organizations.

She said the scholarship is a huge financial relief in helping solidify her decision to go to the University of Texas at Austin.

“Other than just applying for other scholarships, I pretty much know I’m going to UT,” she said. “It makes it a lot less stressful because I now I know I can definitely go.”

The Moody College of Communications is highly selective. USA Today ranked the journalism program as second in the nation. 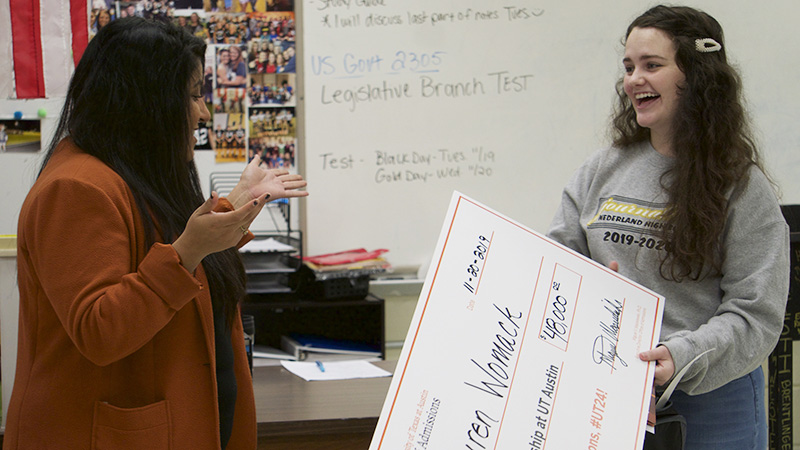 Federal charges may be filed on three people arrested on gun charges after a Port Arthur traffic stop. Those arrested... read more