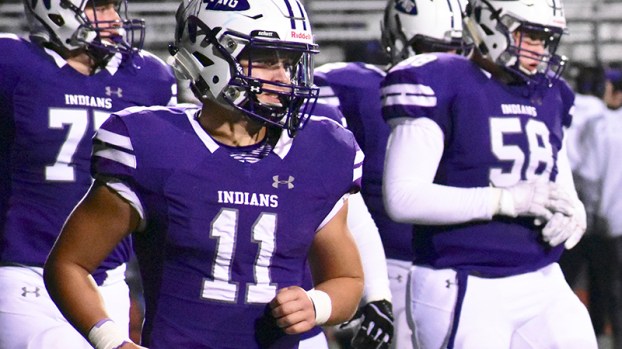 PNG running back Zane Hernandez and his teammates take the field out of a timeout against Barbers Hill on Nov. 1 in Port Neches. (I.C. Murrell/The News) 11-1-19

Both Zane Hernandez and Santiago Agudelo gave, independently, the same advice to upcoming underclassmen: Don’t take anything for granted.

“Give it your all, every second of every day, every day during the offseason. Just give it your all,” Agudelo said. “It’ll be gone before you know it. I started in varsity as a sophomore and I thought this day would never come, but it came pretty dang fast. Cherish every moment because it can be gone in a heartbeat.”

“It flies by, it really does,” Hernandez said. “I never thought my football career would end here, but it did and I just want to tell them to remember everything. Have fun.”

The Port Neches-Groves seniors reflected on their high school football careers with the Indians. Head coach Brandon Faircloth said all the seniors this past season were special, especially after a higher-than-usual rate of injuries.

“It always ends earlier than you want it to,” Faircloth said. “I thought our senior class did a wonderful job of leadership and working hard. We had so many guys step into some roles they probably didn’t know they were going to have to play for our team. Our kids just handled adversity really well. They were a joy to coach. Our senior class was just a special group and I’m really going to miss them.”

Hernandez and Agudelo aren’t looking back with regrets. What’s most important to them is fun they’ve had playing with their brothers.

“It was a really awesome senior year. It fulfilled my expectations ,and that’s really all I could ask for,” Agudelo said. “You want the best, and I’m sad it’s over, but we had a good season.”

“It was fun,” Hernandez said. “We made a lot of memories and had fun playing with my friends. I’m sad it’s over but that happens.”

Hernandez will gear up to play soccer soon. His arm in a sling, he said that learning how to be coachable will translate across just about any sport he participates in as soon as he’s better.

“I’ll be moving into soccer eventually after my injury heals,” he said. “After that I’m going to coast into graduation after soccer’s over and then go to college and that’ll be it.”

Hernandez is applying to the University of Texas and has already been accepted into Texas A&M. He’s keeping Lamar as a fallback just in case.

He hasn’t decided whether he’ll play football for any of the schools.

“It depends on if they want me to play, then I might,” he said.

Agudelo, however, is finished with athletics. He’s applying to Texas A&M, Stephen F. Austin and Lamar for their academics rather than for sports.

“For a little bit I wanted to go play college football, but the wear and tear just got to me,” he said.

For the rest of the year Agudelo will focus on keeping his grades up with both eyes on making it to college.

“I just want to be a successful man,” he said. “That’s really all I’m trying to be, just keeping my grades up and being an example for the community and the young kids that come behind me.”

Faircloth says in the 11 years he’s been at PNG he’s known many of his seniors since they were in kindergarten. He’s watched them grow into a group of young men with integrity.

“They’re just a special group of kids that cared about each other, cared about our program, cared about PNG football,” he said. “They had great character, great integrity, were fun to be around, fun to coach, and when you have a group like that, not only does it make it fun to come to work everyday but fun to go to practice. Man, I really enjoyed watching them play on Friday nights.”

It’s been a journey for seniors Alex Ned and Jatavian Neal. Their high school football careers with the Memorial Titans... read more