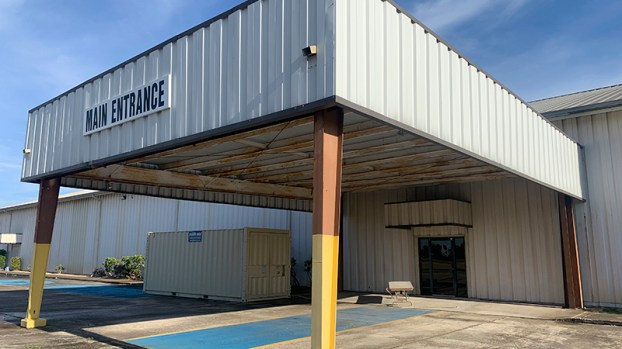 Bob Hope School in Port Arthur purchased the old Central Baptist Church at 4545 Highway 73 for a new high school location. The space is a two-story building on 20-acres of property that will include 40 classrooms, band hall, gym, weight room and more. (Cassandra Jenkins/The News)

Bob Hope School is one of two charter school systems in Port Arthur, and the current high school is beginning to spread its wings and break free of its over-capacitated confinement.

The Bob Hope Schools purchased a 20-acre piece of land and the old Central Baptist Church facility, 4545 Highway 73, last December with hopes of flipping it into a new and improved high school campus with an adjoining administration building.

Currently, 790 students from sixth through 12th grades use the existing location off of Ninth Avenue, which includes several modular buildings detached from the main building.

“We’ve really outgrown ourselves here in the current facility,” Lopez said. “The other thing is, we’ve decided that we prefer to have a middle school and a separate high school. Next year we will have 6-8 here and 9-12 at the new facility.”

The new site, located next to 5Point Credit Union off the feeder road, will undergo the renovation process next month.

“Right now, it is bare inside,” Lopez said. “We’re building everything from scratch. We just have the shell.”

The high school will include 40 classrooms, a new band hall with a separate strings program and a gymnasium with a weight room, as well as an improved cafeteria.

The new campus will hold about 560 students.

“We’re going to start offering broadcast journalism,” he said. “We’re going to continue with our culinary arts, our fashion design and forensic science classes. Right now, with the separate modulars, the instructors don’t have everything they need to fully teach the classes. In the future, they’ll be able to have sinks, science tables and some storage for their equipment.”

The open land next to the building will also allow for a tennis court, soccer field, weight room and track and field space.

Bob Hope is currently a part of the Texas Christian Athletic League. Lopez said the addition of regulated fields would allow athletes to be properly trained and eventually phase back into the University Interscholastic League.

“One of our students last year won state for cross country,” he said. “Next year, he will have the ability to have a proper place to run. Our athletes do really well here and we want to represent that.”

Once the ninth through 12th graders are fazed into the new building, the current location will consist entirely of middle schoolers.

Lopez said he is ready to get the process underway and begin lowering the current 1,000-student count waiting list.

“We started with 250 kids, sixth through 12th grades in 2010,” he said. “We’ve gone to 790 and there is still a humongous amount of kids on our waiting list. There’s a demand for our program and we want to be able to provide as many opportunities for the kids who want to come in.”

The Bob Hope High School has a finished projected timeline for August 2020.

The city of Port Arthur is doing its part to reduce emissions from public transportation and also upgrading its terminal... read more