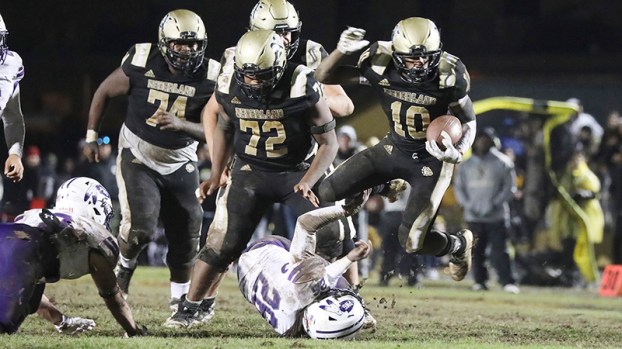 Junior Josh Mazyck was in rare form, not just last Thursday but the whole week.

“He was running hard, and you could tell in practice he was running a little different,” Nederland head football coach Monte Barrow said. “There’s a practice speed that people have, and not that they don’t practice hard. It just seemed like every rep he was ramped up a little bit, which can help guys figure out, ‘If I practice like this, it can translate into performance,’ and I think that’s exactly what happened to him last week.”

Mazyck carried the Bulldogs’ offense against the Manvel Mavericks with 133 yards on 26 carries. He brought at least three Manvel defenders with him 4 yards to cross into the end zone in the final seconds of the first half for a touchdown.

Manvel won 49-14, but whatever Mazyck was doing that week, it certainly worked for him.

Mazyck had a slightly different take on his touchdown.

His great performance in the face of a hard-hitting Manvel defense earned him recognition as The Port Arthur News Player of the Week for Week 12.

For Mazyck, getting to this point required a lot of hard work.

“Early in the year, not unlike with Bryce [McMorris] and staying in the pocket, maybe he wasn’t as sure about his offensive line like last year with some guys that had a lot more experience,” Barrow said. “He had three guys that were new up there. We could tell him all we want to trust where it’s going to be. Until he does, it’s going to show up in how he runs.”

Mazyck believes, as does Barrow, that he got much better in trusting the offensive line. He also says he’s improved his footwork this year, along with his vision on the field.

He’s gotten to the point that he does what he needs to do when handed the football:

“Not hesitate when I see a hole open up, and just keep running, keep pushing my feet,”Mazyck said. “I’m more confident in my runs. Now instead of hesitating I just go for it, chance it.”

Barrow thinks Mazyck was getting ready to show off his best against the No. 2-ranked team in 5A Division II on Thursday, and that may be the source of the extra tenacity.

“He’s not a lazy practice guy; he gets the ball and he goes,” Barrow said. “It was just something a little different, and in the game I think Josh is one of those that felt like he could show what he had individually playing a team like Manvel. If you can have a big game against somebody like that then you’re putting yourself out there, and I think Josh has that kind of pride about himself and how he can run the football.”

That pride is something Mazyck can take with him, on the back of more hard work in the offseason, into next season.

Other big performances of the week in Mid- and South County from the first week of the playoffs:

In Memorial’s 49-7 loss to Shadow Creek on Friday:

In Port Neches-Groves’ 48-14 loss to Fort Bend Marshall on Friday: