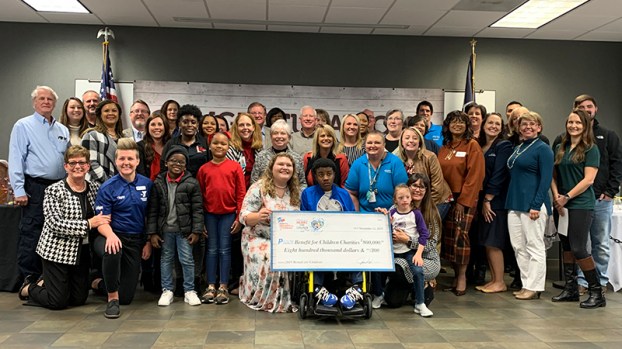 Representatives from the Valero Port Arthur Refinery presented $800,000 Friday to 31 local charities in Southeast Texas. The funds came from the Valero Energy Foundation as a result of fundraising through the 2019 Valero Texas Open and Benefit for Children.

The tournament generated a record $15 million for charities across the nation.

Vice President and General Manager of the Valero Port Arthur Refinery Mark Skobel said the Valero Texas Open and Benefit for Children is the third oldest tournament on the PGA tour and he has only watched its benefits grow.

“The tournament is played in San Antonio and has been there for 91 years,” he said. “Valero signed on as the sponsor in 2002. This year we committed to stay as a title sponsor through 2028, which means we will have a benefit for children’s charity for nine more years.”

Skobel said he is proud to be a part of one the most charitable tournaments on the Professional Golfers Association Tour.

“The Benefit for Children’s charity is a golf tournament held on the Monday after the Texas Open,” he said. “The tournament is sponsored by the Valero Foundation and its business partners, vendors and suppliers. 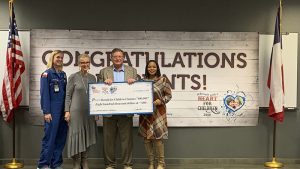 “What began as a small tournament to benefit a local San Antonio charity turned into a nationwide event who’s proceeds go entirely to children’s charities.”

Since 2002 the tour has raised over $155 million for children charities across several communities. The Port Arthur Refinery alone has donated over $7,600,000 to local aid organizations.

Skobel said employees of the plant nominate a charity of their choosing, the Port Arthur Refinery Benefits Committee then reviews the applications before distribution starts.

“We’re very happy to help all these charities in our community,” he said. “Especially the ones that provide sport for our children. Our future is the children and sometimes they are the ones most in need. We’ve heard a couple stories of how the money has helped people and it just warms your heart that we’re able to do that.”

Barbara Phillips, public affairs manager for the Valero Port Arthur Refinery said the number of charities jumped from 23 last year to 31 this year, a new record. 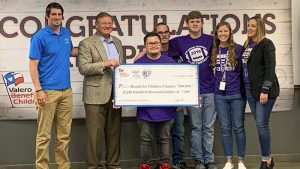 “The money is delivered to all of the facilities where we have major operations in the United States,” she said. “We are super proud to have the amount we have today. To be able to distribute $800,000 to 31 charities here at home is just amazing. We’re so grateful for anybody involved in helping our community’s children.”

Skobel said he wants to extend a special thank you to all of the company’s sponsors, business partners and vendors.

“Without them, it wouldn’t be as much money,” he said. “Each year it only gets better. The nice thing about it is that the money really comes back to the community. It doesn’t stay in the corporate office or go to one, two or three major charities. All over our 14 locations, the same event is taking place today. We’re lucky because our charities are right here in our backyard.”