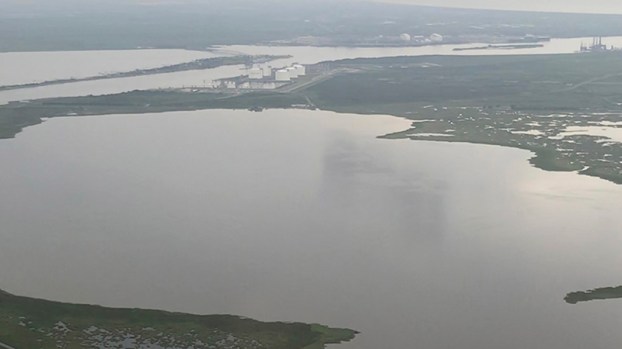 Keith Lake, near the edge of the Sempra property. (Ken Stickney/The News)

Jefferson County Judge Jeff Branick remembers talking with Port Arthur LNG officials 13 years ago, just before becoming an attorney to the county judge, about the prospects of a liquefaction import facility in the area taking in gas from the Middle East.

“All of a sudden, we had the wonder of fracking in the United States and found out about all the oil and gas reserves we have here,” Branick said “It became financially untenable for them to construct an import facility, and then we started producing so much oil and gas and Marcellus Shale in the Permian Basin and the Balkans and everywhere else. All of a sudden, we were going to become exporters, and it’s become economically feasible for them to build an export facility that’s going to build thousands of export jobs here and result in money coming into the United States instead of money going to the Middle East.”

Port Arthur LNG on Thursday held a groundbreaking ceremony for the relocation of a stretch of Texas Highway 87 near Keith Lake. The relocation is intended to reduce the impact of erosion and flooding and provide a safer route away from the Intracoastal Waterway.

Martin Ivey, senior liquefaction project manager with Port Arthur LNG, said clearing the riverfront was a necessary step toward a final investment decision by the middle of 2020 for a liquefied natural gas expansion project. The company, a division of Sempra LNG, is paying $140 million for the road reconstruction and donating the stretch of highway to the state of Texas. Port Arthur LNG, in return, will receive the old right-of-way.

“This is a way we can partner and coordinate with local industry or partners to make room for them and provide a facility with us,” said Don Smith, Beaumont district engineer with the Texas Department of Transportation. “It benefits all the communities. Not only is it a roadway with economic opportunities. As far as us, it would have been OK where it was, but this is an opportunity where we can come together and realize the benefits for Sempra and their facility, but we obviously get a new facility out of it as well.”

Port Arthur LNG officials estimate creation of up to 3,500 on-site engineering and construction jobs, as well as a $2.6 billion contribution to Texas over the project’s first 15 years of operation.

“Like most of them, it’s going to create a lot of revenue for the city,” Port Arthur Mayor Pro Tem Harold Doucet said. “It will create some jobs and it’s also going to contribute to the LNG community here in Southeast Texas, even in Port Arthur. We’re going to be one of the largest areas when it comes to liquid nitrogen gas.”

Port Arthur LNG is just one of a number of local factories on the horizon of expansion projects.

“As you look at the plants, even the refineries are constantly expanding or improving,” Doucet said. “With the LNG, that’s a wholly additional market which creates a whole lot of revenue and a whole lot of jobs. Anytime you can increase your revenue, that’s what it’s all about. It’s vital.”

ROSHARON — The Memorial Titans were just the latest victims in the feeding frenzy of the Shadow Creek Sharks, as... read more