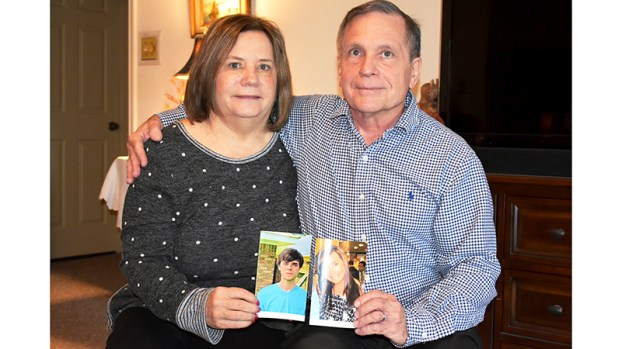 Pinnts find happy ending with family of their own: November designated as National Adoption Month

And while the choice is painful, it is the end result that makes the decision worthwhile.

In 1988, a somber 17-year-old named Marie handed over her baby son to his new parents, Joel and Kathy Pinnt.

Marie, whose last name is now Nixon, didn’t want to give her son up for adoption, but 30 or so years ago things were different. She could not financially support a baby. The Pinnts, of Nederland, were adopting their second child through Lutheran Social Services of Texas.

“I really wanted to keep him but we didn’t have anybody to help us,” Nixon said via phone. “It turned out good. I hand picked his parents. They gave me different folders with couples and they were everything I wanted in a couple if I wasn’t able to raise him. They’re really good people.”

The Pinnts were overjoyed at welcoming Scott. They already had Amy from different birth parents through LSST and the family was complete.

The Pinnts had agreed on an open adoption saying they were agreeable to sharing the first name of the child, sharing photos and periodical letters.

Then, when Scott was 11, Marie did some detective work and found his home address and school. This, she said, was before the Internet was popular. She even went to the school — it was summertime — and peeked in the windows and saw school kids’ colorful drawings and knew somewhere her child had drawn one.

“It was a nice area and looked peaceful,” she said. “I just had that peace after that. It didn’t haunt me after that.”

She said this was difficult.

“It was really hard to do that but sometimes the right thing to do is the hard thing to do,” she said.

In 2005, Marie contacted the LSST, who erroneously sent a letter to the school where Kathy Pinnt taught at the time. Since it was summertime the letter sat for months.

They learned that their son’s birth mother wanted to meet him when he was 18.

So there they were with Amy, not knowing her birth parents and not wanting to meet them while Scott’s birth parents were being discussed. The Pinnts said Amy declined to be part of this interview.

But a meeting was set up for Scott and Marie.

“We were apprehensive then figured it would be OK. You’re always anxious, you don’t ever know what can happen,” Kathy Pinnt said.

They met at a deli near Rice University. That is where the Pinnts went for orientation for adoptive parents.

Scott Pinnt, who now lives in the Dallas-Fort Worth area, remembers the day he met his birth mother

“There was a little bit of fear and also excitement,” Scott said. “I was really curious to know the people I came from.”

He was wearing a Zelda video game T-shirt and Marie laughed and said she played the game the entire time she was pregnant with him.

“I got to go to his graduation, and it meant so much to me,” Marie said. “It was probably the happiest day I’ve ever had, getting to see him again and meet him as an adult.”

Scott later met his birth father, Brian Payne, who said they were young when Scott was born and decisions had to be made for Scott’s safety and health.

“The very first sight of him I knew exactly who he was. It is one of the best feelings I’ve had,” Brian Payne said. “He was polite and well spoken, intelligent. I was really impressed with him and the more I talked to him the more I realized how down to Earth he was. Joel and Kathy did a great job.”

Payne is an advocate of adoption and said he has a lot of respect for Dave Thomas, founder of Wendy’s and namesake of Dave Thomas Foundation for Adoption.

Marie, likewise, is an advocate for adoption.

“I hate to hear when people say they want an abortion and there are some people who really want a child and cant have a child,” she said.

Scott keeps in touch with his with Marie, who lives out of state with her current husband, and with Bryan separately.

He also stays in touch with his parents who gave him a life and raised him to be the man he is today.

He is working on getting a software engineering degree in the future.

NEDERLAND — To hear Joe Oates tell it, food trucks are the industry’s “it” feature, and Nederland officials would be... read more