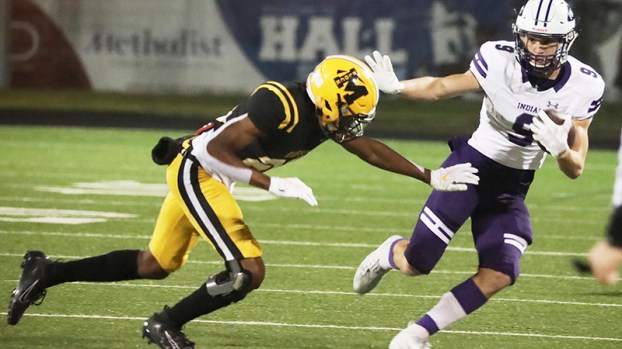 It was an ominous sign as heavy-underdog Port Neches-Groves (7-4) made its way into Ken Hall Stadium this early afternoon. This stadium is named after the country’s No. 2 all-time leading high school rushing record holder Ken Hall, affectionately known simply as the “Sugar Land Express.”

And Brandon Faircloth’s Indians found out in a hurry why name Ken Hall is synonymous with this setting for their game against No. 5-ranked Fort Bend Marshall (10-1), which has eliminated PNG from the playoffs a second straight year. With Achane rushing for 248 yards on 18 carries and Hornsby adding 115 yards on the ground, Marshall was just too much for the Indians to handle. 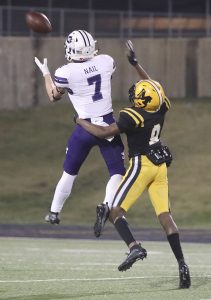 After sleepwalking through much of the first quarter, Hornsby and the Buff offense got on track. Hornsby sped around right end from 53 yards for Marshall’s opening score with 4:42 of the first.

Achane, a first-team all-state kick returner last season and a second team all-state running back, scored his 21st and 22nd rushing touchdowns of the year in the second stanza on dazzling 32 and 29-yard scampers to make it a 21-7 halftime lead.

PNG had cut the Marshall 14-0 lead to a touchdown driving 75 yards in 10 plays midway in the second period. A 1-yard sneak by Bost provided the Indians’ lone touchdown of the half.

Bost, who completed 10-of-14 passes for 90 yards in the first half, hit Wuenschel for 23 yards and Brady Nail for nine in the scoring drive. He finished the night 17-of-27 passes for 154 yards.

Hernandez ran hard against Marshall’s aggressive defense for gains of 9 and 13 yards in the march to paydirt.

But the big play of the drive came on a flanker-around 17-yard pass from Wuenschel to senior Carson Broussard to the Buffalo 1. Bost sneaked in the touchdown with about 5 minutes left in the half.

Sophomore Tate Sandell’s kick was perfect and Marshall’s lead was trimmed to 14-7.

But late in the second period, Bost lost a fumble as the Indian 38. Achane, again, was the man on the spot as the slippery 5-9, 175-pound senior wiggled his way around the left side of the Indian defense for 29 yards and another touchdown with just 86 seconds before halftime.

The Buffs’ big strike capability sent them to halftime leading by a pair of scores and 21-7.

The Indians were the beneficiary, in a negative way, of the Buffs’ offensive onslaught and defensive prowess. Marshall ran up 419 total yards and limited the No. 3 seed out of District 12-5A-II to 269 total yards. In shutting down the Indian ground game to only 125 yards, the Buffalos’ defense was, indeed, formidable.

On a six-game win streak coming into the contest, the Buffalos were scoring an incredible 63 points a game clip during this stretch. On the year, their 52.2 points a game average is one of the best in Texas. In its 11 games, head coach James Williams’ club have also held the opposition to just 11.1 points a game.

With big-play athletes all over the field, Marshall’s only loss of the year was a 38-34 setback to undefeated 11-0 rival Manvel in the fourth game of the season.

Since then, they have continued to put up amazing numbers. And Friday was no exception.

Marshall scored a touchdown in the final 86 seconds of the first half to take a 21-7 halftime lead.

Devon Achane who had 4 rushing TDs and 248 yards rushing.

The Indians finish their season at 7-4. Marshall will take on A&M Consolidated, which defeated Pine Tree 42-14.

— By Larry Bodin, Special to The News

ROSHARON — The Memorial Titans were just the latest victims in the feeding frenzy of the Shadow Creek Sharks, as... read more