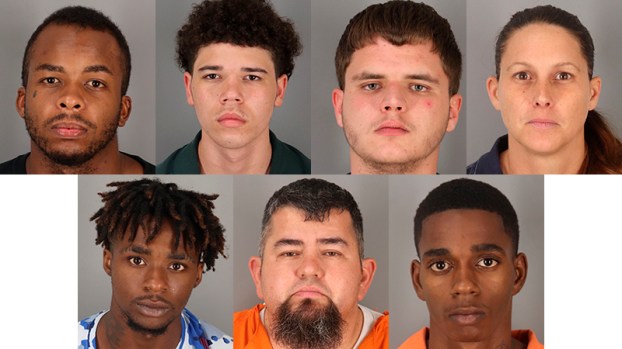 Seven Port Arthur residents that authorities deem as dangerous were indicted by a Jefferson County grand jury for engaging in organized felony activity.

The indictments stem from a July 31 raid on a home in the 4100 block of Charlotte Drive and most of the accused have links to other crimes in the area.

The following Port Arthur suspects were indicted for engaging in organized criminal activity for an incident that occurred July 31:

Port Arthur Police Department and members of the SWAT Team executed a search warrant at approximately 5:49 p.m. July 31 for the possible discovery of a stolen rifle-resistant plate carrier vest with the words “POLICE” on it, firearms and narcotics. District Judge Kent Walston signed the warrant, according to the probable cause affidavit for arrest for the accused.

While there police found 3.23 grams of cocaine, scales and individual baggies set up for sale as well as THC oil, marijuana, multiple firearms and the police vest.

In addition, a stolen Rock River AR-15 was located in the home.

The home on Charlotte Drive lists Ismael Loya as the owner, according to the Jefferson County Appraisal District. Another search connects a person by the same name to Loya Electric at the same address, though officials with the District Attorney’s office could not confirm.

The probable cause affidavits also indicated the accused individuals as being part of the 1224 Gang.

Jefferson County District Attorney Bob Wortham said all of the individuals have other cases pending and those cases have been moved to the 252nd Court so one person can handle them. Wortham said it typically takes nine months to a year before a case goes to trial.

“They are an actual gang and are all over social media making threats, showing weapons and were involved in a string of home invasion robberies,” Nichols said.

Several have been in jail and have had problems there as well, he added.

If found guilty, the penalty for first degree felony engaging in organized criminal activity is five to 99 years or life in prison.

Harvey victims hit by Imelda may apply for assistance

Even if you registered for federal assistance because you suffered damage from Hurricane Harvey, you can register for assistance if... read more