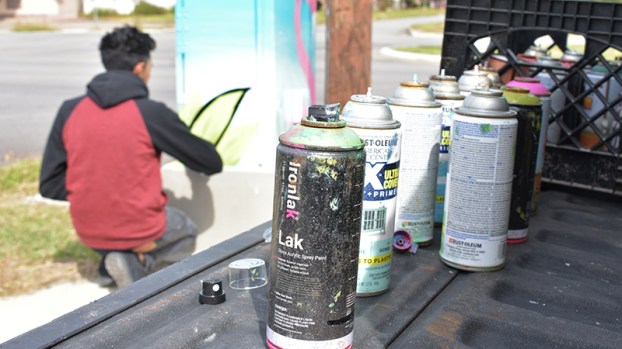 Spray paint cans sit on the tailgate Wednesday of Port Arthur artist Elias Cabrera as he paints a junction box at the corner of Woodworth Boulevard and Seventh Street.

You may have seen them around town or in nearby cities, colorfully painted junction boxes — taking the drab humdrum boxes and making them works of art.

The artists, each having their own flair and style, have come together in the spirit of volunteerism and used their talent to, well, make others smile and maybe brighten up the area.

Port Arthur resident Elias Cabrera is a graffiti artist who did several of the panels of a box at the corner of Woodworth Boulevard and Seventh Street. His portion of the box features a colorful flamingo, tropical scene and some birds with a white egret — a common site in Southeast Texas.

These are far from all; Leyni Illa-Peterson, Yollani Illa and D’Lynne Illa took on the task of a coastal theme with pelican and crab and John Janis painted a cowboy roping a steer.

Then there is “I heart Port Arthur” with bluebonnets, a Janis Joplin portrait done by Tabby Guerreo near FM 365 and El Viejo Tony restaurant, a cowboy themed box with hat and boots, a red gift box not far from Central Mall, a country themed box with children, bees and sunflowers near Turtle Creek Drive.

Local artist Linda Guillory is coordinating the volunteer artists for the project in Port Arthur and said there is a therapeutic element to painting, so much so that she has organized Art Therapy Group, which can be found on Facebook.

“It’s a way to get out of your head,” Guillory said.

Individuals wanting to join in and paint, or learn to paint can contact her through the Facebook page.

She’s also looking for people to volunteer and help people who need buildings repainted. Check the Facebook page for details.

The painting has already occurred in parts of Groves where the library winds have seen some upgrades and some businesses are getting window scenes.

Nederland City Council earlier this year gave its high school students the green light to paint some boxes; the box on the corner of Nederland Avenue and 21st Street near Bulldog Stadium shows a different picture on each side of the box.

The box at Hillcrest depicts a giant octopus wrapping its tentacle around a ship.

The city of Port Neches as also seen some of the art in their town, mainly a scene painted on the window of the chamber of Commence office on Port Neches Avenue.

Projects such as these are sure to make motorists smile and brighten up a once dull area.

I speak to several students every week. I’ve interviewed young people from kindergarten to college with aspirations to be orthodontists,... read more