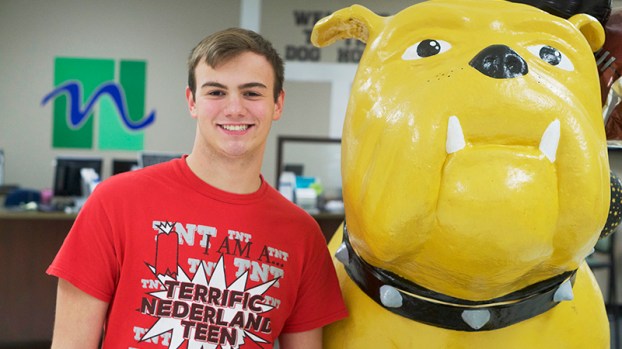 Nederland High School senior Will Denson is the president of four different groups, in the Honor Society, member of the choir and a straight-A student. Denson poses next to the famed Bulldog at Nederland High School, Monday. (Cassandra Jenkins/The News)

NEDERLAND — Will Denson is a leader on campus. The Nederland High School senior is the president of four different groups, in the Honor Society, member of the choir and a straight-A student.

Principal Steven Beagle said Denson has a bright future and is a great asset to the school community.

“Will has exhibited great leadership in our student body and has gone beyond just the scope of working with the students, but also to reach out to our faculty about how he feels about the benefits of education,”Beagle said. “He does all the right things. He takes care of his business and he’s committed to being the best that he can be.”

Denson is the president of the student body council, the concert choir, First Priority and the Terrific Nederland Teen’s group or TNT.

“I’ve been in student council since sixth grade,” Denson said. “When I hit high school around my sophomore year, I decided I wanted to be more active in it. I became class vice president that year and I moved to president my junior year. I thought it would be a great opportunity to be an influence on my school.”

Denson was nominatedlast year by his peers to be president of First Priority, a Christian organization at the high school.

The group meets every first and third Thursday of every month.

“We have a little sermon, we do music, play games and worship,” Denson said.

Last year Denson was also voted as overall member for TNT, spurring him to run as president the following school year.

“TNT is all about drug and alcohol awareness,” he said. “We go to the different elementary and middle school campuses and talk to them about what they shouldn’t be involved in. We help them make smart decisions as they grow older.”

Denson led the concert choir his freshman year and has been singing since sixth grade.

“I like to volunteer,” Denson said. “I like public speaking and these groups give me that opportunity. I enjoy each and every one of those organizations for that reason.”

Denson said aside from chalking up on extra-curricular activities, he also spends a lot of time on his grades, standing in the top 11 percent of his class.

“Before graduation I want to make sure that I keep my entire straight A’s,” he said. “I want to get the college credits and after that I want to attend Texas A&M or Baylor University for orthodontics.”

Growing up, Denson said he experienced a lot of issues with his teeth including three root canals, braces, surgery and bad enamel.

“I had a doctor that would go through each process with me and tell me what was going on,” he said. “I started to get really interested in it and then one of my cousins went into dentistry, explaining his whole process to me. When I got my braces, I really decided that’s what I wanted to do. I just find it really interesting.”

Denson said a historical figure he really looks up to as he grows his leadership roles is Martin Luther King Jr.

“He was a charismatic person, and that’s how I talk to the people at all of our meetings,”Denson said. “You just got to keep them involved, keep the peace and make sure everybody is included.”

Outside of school Denson coaches select basketball in the summer, spends time with his family, does volunteer work and travels.