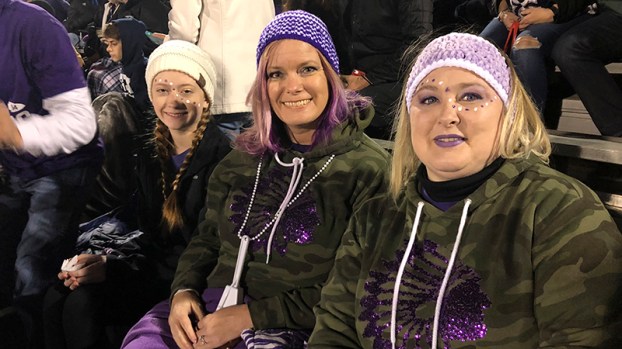 From left, Jocelyn Hagg-Watson, Tammy McCelvey and Tanya Thomas deck themselves in purple for PNG at the Bum Phillips Bowl on Friday. McCelvey and Thomas have a son a daughter respectively in the PNG band. (Brad Robichaux/The News)

‘You can tell it’s madness’: Fans bundle up to support Indians, Bulldogs

NEDERLAND — The temperature was dipping in Bulldog Stadium, but that didn’t keep away the diehard fans of the Nederland Bulldogs and Port Neches-Groves Indians.

Tammy McCelvey on the PNG side says in the nearly two decades she’s been coming to the Bum Phillips Bowl she’s only missed a couple here and there.

McCelvey says this isn’t just another football game for the players or fans.

“You can tell it’s madness,” she said. “It’s also all the festivities that go on through the week. All the middle schools and elementary schools have their own pep rallies. Everybody is getting into it. Being the biggest rivalry in the state of Texas, it’s a thing.” 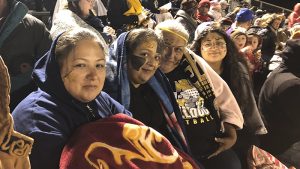 Santana Fuentes and her family were bundled up in blankets to support her sons, Nederland defensive ends Jesus and Jose Fuentes.

“We’re supporting them,” she said. “We’ve been to every single game but this is the biggest one — and the coldest one.”

Neither the cold nor lack of seating has stopped Fuentes from coming to the game, and she’s been plenty of times before.

“I had to bring extra blankets because it’s very cold,” she said. “It’s fun to be here and it just shows that there’s a lot of people to support them. There was one year we had to stand over by the fence because they didn’t have any more seats. It’s very big but I love coming.” 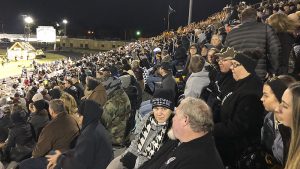 The Stands at Bulldog Stadium were packed for the 2019 Bum Phillips Bowl on Friday. (Brad Robichaux/The News) 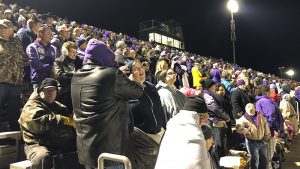 The following individuals were indicted by a Jefferson County grand jury. An indictment is not a final conviction of guilt;... read more