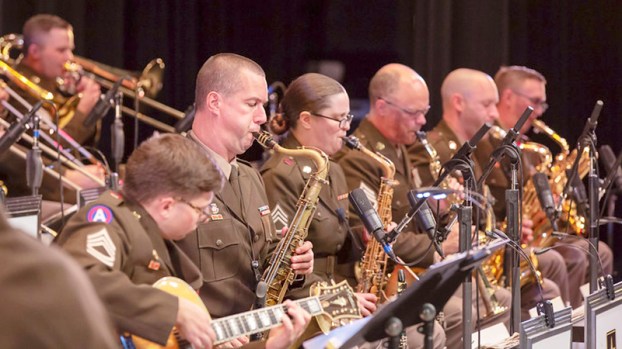 The Jazz Ambassadors, touted as America’s Big Band, will present a free concert — “The Greatest Generation” as a tribute performance to the service of the men and women of World War II.

The free event will be at 3 p.m. Sunday at Woodrow Wilson Early College High School Auditorium in Port Arthur. Those without the free tickets can get in the doors if seats are available.

“This program is both educational and entertaining,” U.S. Army SFC Jonathan Milburn said. “It’s the music of big bands from that era and World War II and as you go along the beginning of WWII to the end, it explains things that happened. There will be a projector with a screen to go along with it.”

This, he said, is meant to honor the civilians and military and educate the younger people today because it’s important to keep history alive. Some younger folk don’t know the history.

The concert is also a way to connect the American people to their Army.

The music will range from traditional patriotic music and Armed Forces Salute to “Stardust,” “In a Sentimental Mood,” “ I’ll Be Seeing You,” and “Goodbye” among others.

Concert goers will also get to see the Army’s newly redesigned green uniforms, which are a throwback to the WWII uniforms. Currently the band is the only people in the Army who can wear this uniform.

This year’s also marks the 50th anniversary of the Field Band.

The following individuals were indicted by a Jefferson County grand jury. An indictment is not a final conviction of guilt;... read more