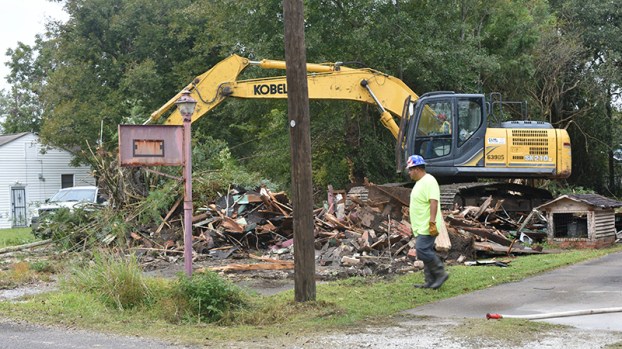 The former Tadlock’s Rose Ridge Flowers — vacant and abandoned for years — was torn down on Thursday.

The once busy florist business has ties to Hollywood through Thelma “Tad” Tadlock, whose family owned and ran the Pear Ridge area business decades ago in the 3800 block of 28th Street.

Thelma Tadlock was a Port Arthur native and dancer who followed her dream to New York and landed a role in Make A Wish, followed by three more Broadway plays, according to information from the Museum of the Gulf Coast, where she is featured in the Notable People wing.

She went on to work in television, working as a dancer, choreographer, actress and model.

The floral shop was popular decades ago and changed hands several times before it were shuddered years ago.

A crew from AAR Inc. demolished the structure while Stacy Alexander watched from across the street. Her aunt, Nina Crutchfield, once worked with Tadlock’s mother in the shop years ago before going to buy her own shop. Alexander’s mother, Linda Newsome, knew the Tadlocks and was also involved in the florist business.

Bartie to meet with governor, vying for workforce training to help underemployed