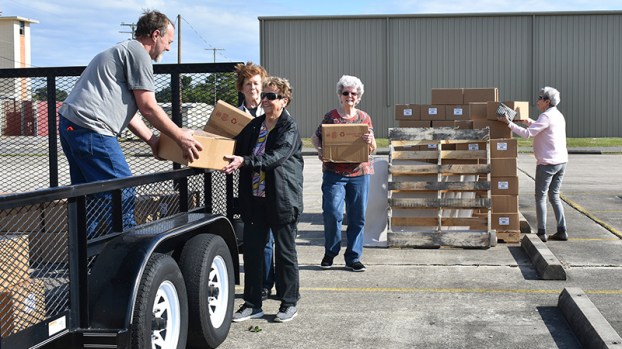 Brian Reese, left, takes a box of pecans from Katherine Richards as Karen Mills, Jessie Hodge and Renella Primeaux wait to hand off more in Groves. The group is members of the Jefferson County Extension Education Association, which is holding a pecan sale fundraiser for scholarships and charitable organizations. (Mary Meaux/The News)

GROVES — Jefferson County Extension Education Association is holding its pecan sale fundraiser — just as it has done for the past 30 years.

The group, which is a stem of Texas A&M AgriLife Extension, is selling a new crop of 1-pound bags of pecan halves for $10.50 per bag.

Group member Karen Mills said these are Texas pecans coming out of Comanche, which is near the middle of the state.

Mills, a longtime club member, said her mother, Inez Libersat who is 103, has been a member of the club for 75 years. She’s still a member, though not active at this time.

Some members of the club — Mills, Renella Primeaux, Jessie Hodge, Katherine Rogers and Brian Reese — met near Groves Activity Building on Monday, where they unloaded a trailer full of pecan boxes. The boxes were going home with club members who are selling the pecans.

“Proceeds go to give scholarships to relatives of members and 4-H’ers and to charitable organizations,” Hodge said.

They also give scholarships to adults who go back to college.

Charitable organizations that have received funds from the club in the past include the YMCA After-School Program in Port Arthur, Southeast Texas Food Bank and Nutrition Services for Seniors.

4-H is an organization for youth delivered by Cooperative Extensions such as Texas A&M AgriLife, among others, according to the website. Individuals who want to purchase pecans can call 409-989-9211.

His first time out on the field, Port Neches-Groves senior running back Zane Hernandez was amazed at how many people... read more