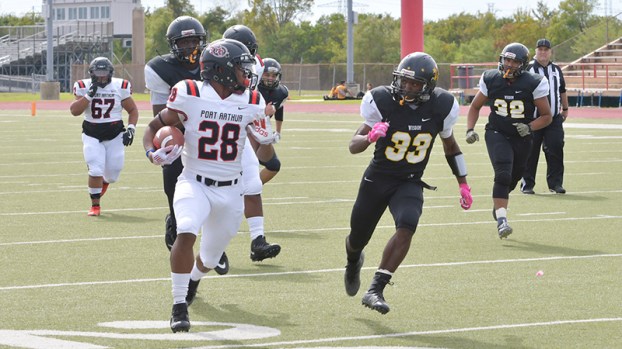 Adrian Hayward said it was his first time running the ball like he did for the Memorial Titans against the Houston Wisdom Generals on Saturday.

The sophomore received one of his first tastes of making big plays for the varsity team, and what a taste it was.

Hayward had five carries for 142 yards and three touchdowns in a 76-0 blowout win. Most of those yards came from two particularly long touchdown runs, one for 45 yards in the second quarter and the other for a whopping 92 in the fourth.

Hayward’s other TD run was a 3-yard scamper in the second. For such a big day, the Memorial sophomore is named The Port Arthur News Player of the Week for Week 10.

“It was my first time actually running the ball like that, and it felt good,” Hayward said. “I’m getting comfortable and coming together as one and as a team as well.”

Hayward has played a few times for the varsity this year, though nothing like what he did Saturday.

Hayward is part of a class of sophomores in which head coach Brian Morgan sees a lot of promise. That class also includes quarterback Jah’mar Sanders, who completed 6 of 7 passes for 120 yards and three touchdowns, and Jaylon Guilbeau, who intercepted two passes and returned one 32 yards for a touchdown.

“It takes a while for sophomores to get comfortable,” Morgan said. “I think we’ve seen that all year. Our sophomores are getting better and better, but it still takes them a while playing varsity football. We’re excited about it.”

Morgan has been bringing along Hayward for several games but doesn’t want to put too much on the sophomore’s plate. He has something for Hayward to work on this week too.

“He’s got a little package going on for the rest of this week,” Morgan said. “I think the big thing for us, and for him although he’s really talented, is not to throw too much at him on a weekly basis, but just let him play fast and use some ability. He’s a big kid but he’s still a sophomore.”

Size and physicality is no issue for Hayward, a formidable big back that can run. And he definitely has speed as well, Morgan says, as seen when he ran 92 yards across a football stadium and wasn’t stopped. The goal is to get Hayward comfortable playing a faster varsity game.

“This week we’re just trying to get him comfortable and getting him up to the speed of the game because even on Saturday the speed of the game is a little bit faster than what he’s played before as a sophomore, and that’s a big deal,” Morgan said. “We think a lot of Hayward and think he’s got a really bright future here.”

Hayward is already getting there and looking forward to the last regular season game against Houston Austin.

“I’m going to get that show out and do the best I can,” he said. “We should play as a team, keep everybody up and make sure everybody stays positive, play as one.”