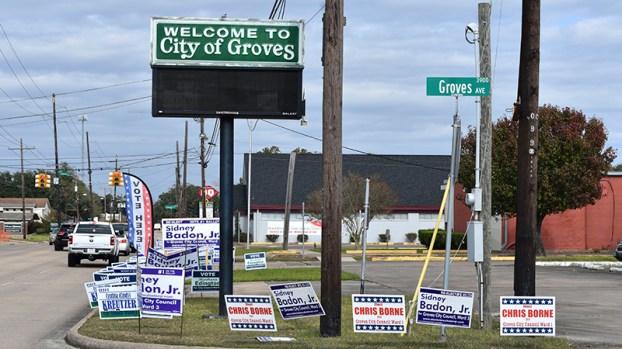 Signs for candidates for Wards 1 and 3 in Groves line the grass in front of the Groves Activity Building. Election Day is Nov. 5 and there are a number of issues on the ballot for areas across the county. (Mary Meaux/The News)

Residents in Mid- and South County will decide the fate of school and water control district bonds, a city council race, tax reallocation to fix roads, horse racing in the county and 10 constitutional amendments.

Early voting totals were lackluster with 3,857 voters casting ballots in person and 491 ballots mailed in for a total of 4,348 ballots cast from Oct. 21 to Nov. 1 spread out over 11 locations.

Rogers Park in Beaumont had the highest number of voters with 1,024 ballots cast with Groves Activity Building location coming in second with 768 ballots cast. Individuals are able to cast ballots in any of the 11 locations in the county during early voting.

In Groves, the Ward 1 and Ward 3 seats are up for election. The Ward 1 race has Chris Borne, 40, pitted against newcomer Cindy Kreutzer, 59.

Borne was appointed to the seat in late November 2018 to fill the remainder of the term of former councilman Cross Coburn. Coburn lost the seat during a heated recall election.

Voters in Port Neches will see a special election pertaining to street repairs though the reallocation of funds.

Proposition A calls for reducing the economic development corporation’s sales tax from one-half of 1% to one-quarter of 1% and reallocating the other one-quarter to provide revenue for maintenance and repair of city streets.

Port Neches Economic Development Corporation, which was formed in 2000, receives one half of 1 percent of sales tax. As a result the PNEDC collects about $450,000 per year that goes to a variety of economic development incentives and projects. The debt service the PNEDC is paying now is about $167,000 per year, which assisted in the sale of a portion of the riverfront property.

If voters approve the Proposition, the funding would provide an additional $200,000 to $250,000 beyond what the city currently budgets for the street repair and maintenance.

The funds won’t be there overnight though. Proceeds from sales tax will not be collected until March and the first rebate from that won’t be received by the city until June 2020.

The folks in Jefferson County Water Control and Improvement District No. 10 — the area between Twin City Highway and U.S. 69 and between the cities of Nederland and Beaumont including Central Gardens and rural areas — will decide on a tax hike — the first one of its kind in 36 years.

The WCID is asking voters to approve an 8-cent-per-$100 valuation tax that would bring in approximately $226,000 annually. The current rate is 3 cents per $100 valuation.

The take hike would fund maintenance and purchases for the volunteer fire department for items such as bunker gear, fire hose and nozzles, rescue truck and more.

The proposition on the ballot is not for money to build a fire station or new building. A bond for a new fire station was passed a few years back but that was a separate tax.

A location for the races and wagering has not been chosen at this time.

Shawn Caviness-Brigman Jr.’s dad drilled into him every day the importance of education, a lesson he said he’s learned well.... read more