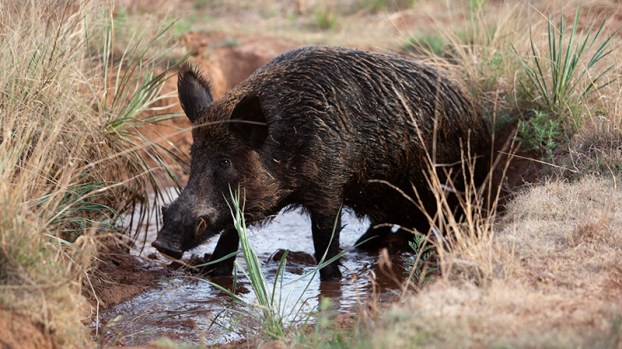 As we all know, life has many different seasons.

There are times that we find ourselves extra busy, and others when we are able to enjoy a little more leisure. This year had been a busy year for me but when my daughter and son-in-law said they had taken a few days off, I was looking forward to spending some time with them. The three of us love to hunt but haven’t done it near as much as we would like, so this was going to be a special evening.

I had been baiting hogs and checking my cameras daily. Each spot had hogs but they were coming at random times, so I wasn’t sure who would be the lucky hunter. I figured that if we divided up and hunted different stands, at least one of us was sure to be cleaning a hog that night.

We each got in our stand about 1 1/2 hours before dark and began to wait patiently. It became obvious that technology has changed hunting forever because within 30 minutes, someone started a group text. We communicated about what we saw, heard, and our experiences with mosquitoes. We updated each other about every thirty minutes. Some may see this as spoiling the hunt while others say it helps pass the time. Either way, I was enjoying being a part of my kids’ lives.

Apparently I was in the dud stand because I was the only one who didn’t even hear a pig. I got word that Gavan had shot one right at dark and Bree had one come in but it was too dark to see to make a good shot. I climbed down from my ladder stand and headed to the truck to pick them both up.

Everyone was happy for Gavan and the fact that he had shot what, according to his assessment, was a nice hog. That was the good news.

The bad news was that there wasn’t a drop of blood in sight. We searched by flashlight for about 20 minutes but came up empty handed. I assured Gavan that he didn’t need to worry because we could head back to the house 10 minutes away and grab “Jax,” my blood tracking Leopard Catahoula. If the pig was down, Jax would almost certainly find it.

It took a little bit of time, but Jax put together the pieces of the puzzle and came up with the hog. It had only run about 75 yards, but not in the direction, we thought. Now that the pig was found the real work would be done.

I almost decided to help drag the hog out but figured that this would be a good time to see what my son-in-law was made of. Would he whine and complain or would he keep his head down and drag? He passed my test with flying colors and dragged the beast all the way back to my Suburban.

He was excited and I couldn’t be more proud. He earned his nickname “The Gavanator”!
Once we got back to the house, we weighed the boar at 147 pounds, which was a perfect size. I gathered the ice chest, loppers, knife, and sharpener and helped Gavan hang the hog to begin the skinning process.

While we were doing all the tracking, Brianna had already started working on dinner: Chicken stuffed with cream cheese and spinach, green beans, mac and cheese, and even some stuffed peppers as an appetizer.

It dawned on me how fortunate I was to have a great daughter and a great son-in-law. They were each working hard and carrying their own weight on this hunt. The days of me having to do everything on hunting trips appeared to be over.

I checked up on Gavan one more time as he was cleaning the hog. Everything seemed to be going well and I had to make a decision. Do I stand out here and offer aid as he finishes up, or do I go inside and eat the amazing meal my daughter had waiting? I’ll let you figure out what I decided … let’s just say the life is good and the future looks bright for my family.

God has blessed me far more than I deserve.