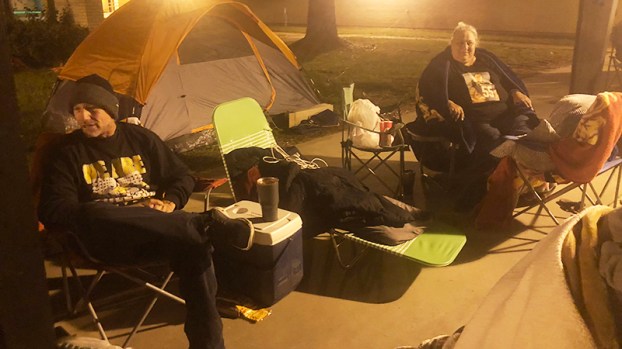 Ron Anderson, left, and Christina Ruiz hold their places in line Monday night in Nederland. Ruiz arrived at 5 a.m. Monday to claim her spot. Her grandson is senior Jesus Fuentes, No. 55 for Nederland.

I’ve told coaches Brian Faircloth of Port Neches-Groves and Monte Barrow of Nederland that I had no idea how big their annual football game was.

My own high school had its rival, of course — I’m not sure if there’s a high school out there that doesn’t call some other school its rival. My school, Sulphur High, saw its rival in Barbe High, across the lake in Lake Charles. We hyped up the game like any good-spirited school would when facing our varsity foes.

Not like Mid-County folks do though. It took a 19-minute drive along Interstate 10 and across the Calcasieu River to reach our rivals. Nederland and PNG are just 10 minutes away. That must make a difference.

These teams were ranked the No. 1 all-time high school football rivalry in 2017 by Dave Campbell’s Texas Football magazine. The magazine likewise gave the rivalry a 9-10 in “animosity.”

This is a high school sports phenomenon I’d never experienced before coming here at the beginning of last year, and then only tangentially. I saw the Bum Phillips trophy sitting in the offices at The Port Arthur News on a regular basis — I thought it was quite the oddity before I knew what the trophy meant. I put the photos on the pages of our former publisher, Rich Macke, as he took the trophy on a tour of businesses in Port Neches, Groves and Nederland, a tradition still continued by our new publisher, Stephen Hemelt.

I remember seeing the photos of Mid-County fans camping out in front of the ticket offices, with lawn chairs, coolers and blankets, waiting for the chance to be the first to buy tickets. Fans fought rain, bugs and hours of fatigue to get those tickets. Susan Bean told The News last year she had been coming to wait hours in line for at least four years.

“There’s going to be a long line,” she said. “There always is. It’s not the first time. I’m actually surprised there isn’t a bigger line yet. It’s part of the process. This is fun. The later at night it gets, the more fun it gets.”

All this hype makes this week’s game “a heartbeat unto itself,” Barrow told me. I can’t imagine how the players feel, surrounded by school spirit, under pressure to make their school proud, maybe daunted by the prospect of playing for the biggest crowd of their season, one composed almost entirely of their friends and families.

They’re also fighting for the No. 2 seed and a home-field start in the playoffs, since both teams are tied with Crosby for second in District 12-5A-II.

“The biggest challenge is navigating the week leading up to the game, to be honest with you,” Barrow told me. “It’s making sure the kids stay focused on what the need to do. There are so many things that go on. It’s spirit week. There are dress up days and all that, and we encourage our players to be involved in it as part of the high school experience. At the same time we’ve got to keep them focused on the task at hand.

I come at this phenomenon with a new perspective this year. To all the fans, players, coaches and supporters, I say let the madness begin.

STEPHEN HEMELT — Greater Port Arthur The Magazine is ready for you

Step outside of your comfort zone. That is the unofficial theme of the latest edition of Greater Port Arthur The... read more