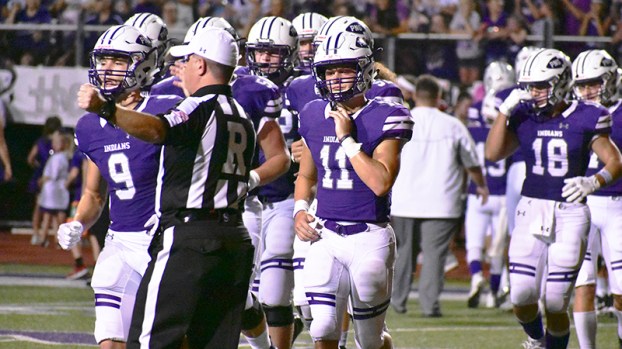 The Port Neches-Groves Indians, reliant on the aerial talents of its quarterback and receivers, will need to find ways around a defense allowing the fewest passing yards in District 12-5A-II.

The Indians found a few of those ways past Santa Fe last Friday in their 20-7 win, but PNG plans to keep its focus against first-place Barbers Hill, a team that has yet to be defeated in district play this year.

“We have all the respect in the world for Barbers Hill, coach Tom Westerberg and all those guys over there,” PNG head coach Brandon Faircloth said. “We’ve played them quite a few times since I’ve been here. It’s always a great game. This year they have a wonderful team, great defense. They’ve scored a lot of points on offense. They have a really good junior and senior class. They’re undefeated, and we’re going to get our shot at them.”

PNG has no need to flinch either. The Indians are tied for second in the district along with archrival Nederland and have one of the district’s top passing quarterbacks and several top receivers.

Junior Blake Bost still has the most passes and completions in the district, by far. He’s nearly equal to Barbers Hill’s own junior Christian Kaopua in completion percentage, 56.9% to 56.2%, and has 186 more passing yards.

Bost thinks Barbers Hill is going to be a fair fight.

“I feel like the biggest challenge is the simple mistakes and penalties,” Bost said. “I feel that we match up well against them, offensively and defensively.”

The trick, according to Faircloth, will be surviving the Eagles’ beginning onslaught.

At this point in the season, teams begin to see playoff implications, and Barbers Hill and PNG want to get a favorable draw to make their postseason last as long as it can.

“We’re playing for playoff seed the last two weeks,” Faircloth said. “Your destiny is in your own hands. We’ve got a chance, we’ve got two tough teams left but that’s how we want it.”

It was Senior Night in Bulldog Stadium and Nederland was hungry for its first win at home. That’s what was... read more