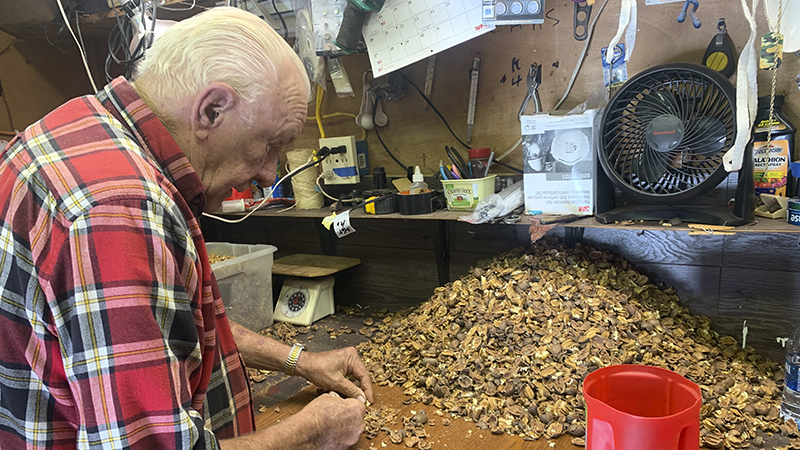 Dalton Deslatte, 80, shells and sells pecans out of his home in Port Arthur. His fully operated machine deshells and peels the nut. Deslatte sorts through the pile Tuesday to ensure no rotten nuts are sold to his customers. (Cassandra Jenkins/The News)

After his initial diagnosis, he went to MD Anderson in Houston for treatment every two weeks until he was healthy enough to pull back on appointments.

Retired and determined to stay alive, the Sabine Pass native turned to a peculiar hobby to keep himself busy — shelling and selling pecans.

Deslatte started by deshelling pecans by hand and made a few dollars in the process. Today, he owns a fully operated deshelling machine and sells pecans faster than they can be picked. 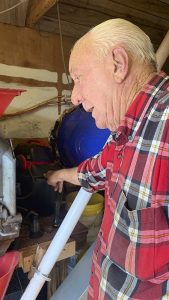 Dalton Deslatte rigged his pecan peeler machine with an everyday vacuum to peel, deshell and sort the shells from the nut. (Cassandra Jenkins/The News)

“The main reason I got into pecans is because it’s something to do,” he said. “I can’t keep sitting around because of the cancer, I’ve got to be busy doing something and this isn’t real hard.

“So about five years ago, I was going around looking at garage sales to pick up a few things. I stopped by this man’s house and he had a 50-60 foot pecan tree. I asked if I could pick some and he said yes. That’s when I got started in pecans.”

Deslatte said he got a couple of 5-gallon buckets and got to work cracking pecans by hand.

“I sat out there all day and I’d get maybe 15-20 pounds,” he said. “That first batch didn’t cost me nothing, so I was happy just making a few dollars. I did that for about two years, but my arm got so tired from doing it. I told my wife, ‘There’s got to be a better way to crack and peel pecans.’ So I got on the Internet and found a pecan cracker.”

Deslatte found a pecan cracker from Louisiana that cracked the nut, but did not help in the peeling process. 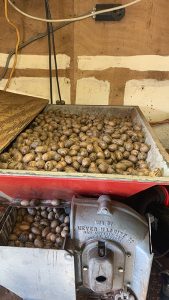 Dalton Deslatte began shelling and selling pecans five years ago after he was diagnosed with lung cancer. (Cassandra Jenkins/The News)

“(The tool) cracked the pecan, it fell down and then we had to pick them up off the floor, put them on the table and take the shells off of it,” he said. “We did that for another year and then my fingers started to bleed from peeling so much. I used to peel 40-50 pounds a day at that point.”

Again, Deslatte took to the Internet, this time in search of a peeler. He found one along the Louisiana-Mississippi area and his small business began to flourish.

He even sold pecans regularly at the Beaumont Farmers Market until the lung cancer began slowing him down and he stationed himself at home.

“I’ve been in business for five years and everyone pretty much knows me now,” Deslatte said. “I do pretty good during the holidays. I’m going (today) to get about 1,800 pounds and I’ll start selling them faster than I can pick them.”

Deslatte’s wife, Carole, helps him bake and sell the desserts making more than a dozen pies with the turn of Thanksgiving. 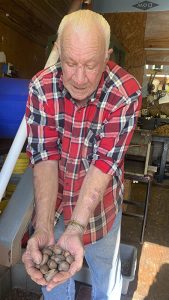 Dalton Deslatte, 80, began shelling and selling pecans five years ago as a hobby to keep himself busy. (Cassandra Jenkins/The News)

Carole uses a special pecan pie recipe handed down to her by her late mother.

Carole said she is thankful to have her husband alive and well and is glad he found something to focus on during a difficult time.

“He has to be busy,” she said. “He drives the people crazy who have the pecans. We have to go to Louisiana a lot of the time to get them and he’s always calling asking if they have fallen yet. It’s been a great thing for him these past five years.”

Deslatte also deshells existing whole pecans for the community at $1 a pound.