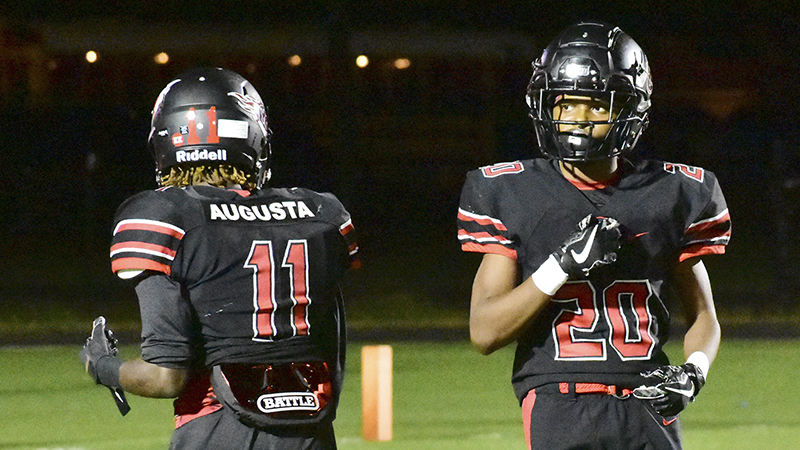 No one seemed to think senior wide receiver Alex Ned would catch the pass from sophomore quarterback Jah’mar Sanders, Ned had said.

Sanders was just back on the field after a hard hit sidelined him for a few snaps. He was being chased down by Kingwood Park defenders and had almost made it to the edge of the field when his throw connected with Ned for Memorial’s second touchdown last Friday.

“Our coaches said if it touches your hand you’ve got to catch it,” Ned said. “We really needed a touchdown in that situation and I just had to get to the end zone.”

That score put Memorial one touchdown away from tying the game against the Panthers, but neither Ned nor any other Titan would touch the ball again for the rest of the night.

Those frustrating moments were common that night for the Titans, and head coach Brian Morgan said many of them were self-inflicted.

“I thought we had some critical execution errors on some critical plays,” Morgan said. “Sometimes they happen early on downs and you can come back from it, but when they happen on third or fourth down, third and short, fourth and short, or on the goal line, those are big time critical errors that are hard to overcome in those situations. That was the difference in the game.”

The night wasn’t without a number of notable successes, however.

Ned was one of Sanders’ go-to receivers, making nine catches for 112 yards.

“It takes a lot of focus, you’ve got to have good hand-eye coordination, you’ve got to learn how to track the ball,” Ned said. “Once it gets in your hands you’ve got to reel it in and find your way to the end zone.”

Junior running back Branden Chaney was carried by quick-moving momentum during the Titans’ first possession of the night to put points on the board first and get his seventh touchdown of the season.

That momentum stalled for much of the rest of the game, keeping the Titans at only six points while the Panthers racked up two touchdowns and two field goals of their own. Chaney did manage to get 34 yards on seven carries for Memorial.

Sanders kept the ball several times so he could move the offense forward, getting 107 yards from 17 carries.

The defense managed to adapt after halftime, keeping Kingwood Park to just one field goal in the second half.

“Kingwood [Park] had a nice little drive in the first half, where they had some good numbers on some things and played with some tempo,” Morgan said. “When (our defense) got to the sideline we adjusted it and played well, especially going forward from there.”

But it wasn’t quite enough to overcome missed opportunities.

“You get down to the goal line, you jump off sides on the one, or you throw a bad ball on third and short on the goal line and the guy was open, those are critical things,” Morgan said. “We’ve got to execute and we’ve got to clean those things up.”

Heading into a Saturday game against Houston Wisdom, the Titans will keep their minds focused.

“We need to do our job, that’s the biggest thing,” Ned said. “We go out there and do our job we should come out with a win. We need one right now.”