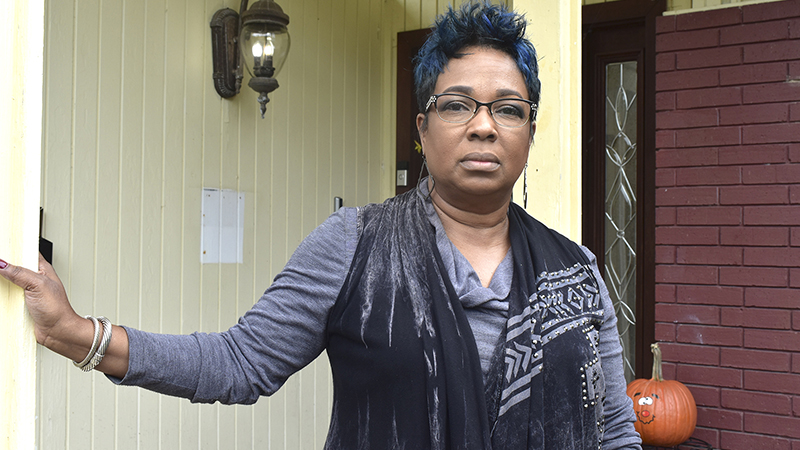 Port Arthur Councilwoman Charlotte Moses is seeking answers as to why she and other homeowners in the city have been turned down for reimbursement from the Texas General Land Office. (I.C. Murrell/The News) 10-29-19

Port Arthur Councilwoman Charlotte Moses received a denial letter from the Texas General Land Office’s Homeowner Reimbursement Program after applying for reimbursement assistance up to $50,000 for the complete rebuilding of her home, which was damaged by Hurricane Harvey in August 2017.

But how many more Port Arthur residents have received such letters is a bigger concern for her.

“It is a growing concern within our community,” Moses said. “We definitely don’t want our residents to be left out due to misinformation or miscommunication or what have you. We are working to try to get to the bottom of this and gain an understanding with the Texas General Land Office on what the requirements are and what they need from us as a city to help our citizens.”

Pamela Langford, acting director of development services for the city of Port Arthur, said her office has noticed an increase of residents receiving denial letters for reimbursement as a result of being located in a special flood hazard area, or a 100-year floodplain.

However, Moses’ home is not included in the floodplain, Langford’s office confirmed in a document dated Aug. 12.

“The concern we have on the city level is substantial damage or substantial improvement is determined by the municipality, so the information that is being given to our residents by the General Land Office, we found to be incorrect,” Langford said. “For properties that genuinely are in a special flood hazard area, Port Arthur inspectors, along with the STAR group, which was a funded group through FEMA [Federal Emergency Management Agency], have gone out and already did the whole substantial damage determinations.”

Moses’ letter was dated Oct. 25. She was given 10 days from the date of the decision to appeal.

“I’ve gone through someone coming into a damage assessment in my home that the state had to pay for,” she said. “I’ve had another person come into a lead-based paint, which the state has paid for, and now you tell me I’ve been denied when you should have had this map since August and the letter showing I wasn’t in a floodplain. So, why [in] October am I being denied or counted ineligible? A lot of citizens are dealing with this, and it’s unfair.”

Langford estimates 12 residents have visited her office and shown they received letters of denial from GLO, but she added they have been told to reach out to the city if any problems arise.

“Several residents don’t really know which way to turn at this point,” Langford said. “In regards to the impact of the city as a whole, we really don’t have a good grasp on how many have been affected by this.”

Langford said she would request more data from the GLO related to those who have been turned down by the GLO for assistance.

Attempts to reach the General Land Office for comment were unsuccessful as of Tuesday afternoon.

“There weren’t many of the structures in the city of Port Arthur that were deemed to be substantially damaged, so [for] the Port Arthur residents that have approached us who have received these letters, when we go back into our database and we review the property information, we find that they aren’t declared as substantially damaged, which would make the information coming from GLO invalid,” Langford said.

The Texas GLO, according to a copy of the letter The News obtained from Moses, denied her assistance, stating her home is located in the city’s 100-year floodplain and the Homeowner Reimbursement Program, or HRP, determined the value of the work completed was equal to or greater than 50% of the home’s value, which defines the term “substantial improvement,” and was not subsequently elevated into compliance with Housing and Urban Development requirements.

“Accordingly, HRP has determined that your post-Harvey repairs may constitute a substantial improvement that requires the elevation of your home to at least 2 feet above base flood elevation,” the letter says. “Since your home was not elevated into compliance when you performed repairs, you are not eligible to receive assistance from HRP.”

In a letter signed by Langford, the city of Port Arthur determined that Moses’ structure received damages valued at less than 50% of pre-damage structure. Under the city’s floodplain management ordinance dated March 9, 2010, the letter continued, “structures located within the 100-year floodplain that receive damages that are less than 50% of structure value can be rebuilt on the original site, but must obtain a floodplain development permit prior to making repairs.”

The letter also added that elevation was not required as a result of Harvey.

The GLO requires homeowners complete eligible repairs to their residence by Feb. 28, 2019. Moses said FEMA gave her $34,000 toward rebuilding her home and that she spent at least $20,000. A property assessment document indicates her home is valued at $83,390.

“I had FEMA assistance only, no SBA [Small Business Administration], no other means,” she said.

Section 42-35 of Port Arthur city code defines base flood as “the flood having one percent chance of being equaled or exceeded in any given year.”

Locations in Mid- and South County received 60 or more inches of rain during Harvey’s hardest impact on the area on Aug. 29 and 30, 2017, according to the National Oceanic and Atmospheric Administration.

Section 42-63 of the code requires that homes within the floodplain be elevated “in relation to mean sea level [defined by the city as “the average height of the sea for all stages of the tide”] of the lowest floor (including the basement) of all new or substantially improved structures that shall be one foot above the required elevation requested (freeboard). This was requested by local FEMA representatives at the Texas Water Development Board, due to all the storms events and erosion that naturally ensued; an engineer shall substantiate this fact to the building official.”

“… So we do go above FEMA’s requirements and say you have to elevate 1 foot above base flood elevation requirements by FEMA,” Langford said.

Moses questioned why the GLO is following HUD guidelines when the city gives directives on whether to elevate a home and determines which homes are in a floodplain.

According to information Moses provided, the GLO reimburses homeowners up to $50,000 in out-of-pocket expenses to repair homes damaged by Harvey.

Homeowners in 48 Southeast Texas counties, with the exception of Harris (which funds independent reimbursement programs) may apply for reimbursement.

Many of Moses’ constituents have gone to her seeking advice on how to rebuild from Harvey and have been denied, she said. Now, the same thing has happened to her.

“There are so many like me,” she said. “This not only affected me; it affected other people in the community, and those have been denied. So many don’t even know or are aware of where to go once they have been denied, so they miss an appeal period, which is unfair to the city of Port Arthur.”

Moses hopes more who have been denied by the GLO will come forward and go through the appeal progress, and that the city can get an accurate count of households to possibly show the city was treated unfairly.

(Editor’s note: The Port Arthur News will have continuing coverage of this story in Thursday’s edition. This version reflects an updated estimate on the damage to the Moses’ home.)