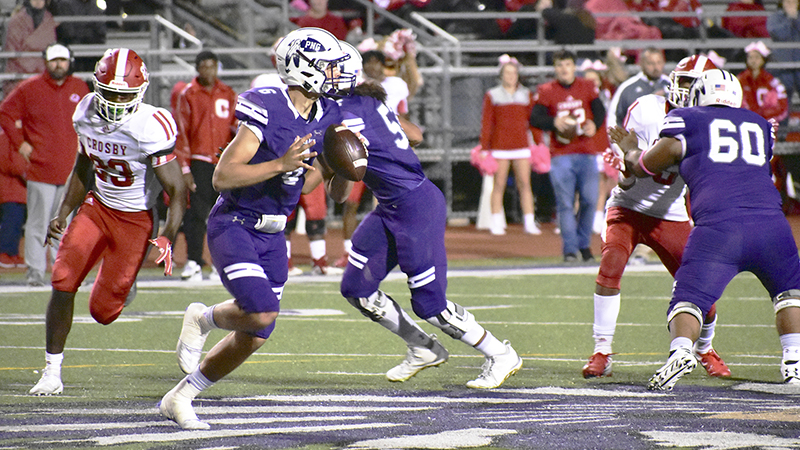 He’s the most prolific passer of District 12-5A Division II in completions and attempts by wide margins. He is now 140 for 251 on the season, along with two of Port Neches-Groves’ three touchdowns from Friday night.

“It takes everybody up front, all the big men up front, and then it takes the receivers making plays for me, and everything falling into place,” Bost said.

Bost is confident going into the Indians’ game against first-place Barbers Hill. Following a 14-for-27, 117-yard passing game with two running touchdowns, he is The Port Arthur News’ Player of the Week for Week 9.

“He’s come up in our program, knows where to go with the football, keeps us balanced,” head coach Brandon Faircloth said. “He has the ability to change the play if he wants to, so he’s got a full run of everything and he does a great job of checking us in and out of plays when we need to. He’s a coach on the field.”

That competence translated into 21 first downs for PNG’s offense against a team Faircloth was worried would hog the ball all night.

“Santa Fe has a ball-control offense and they do a good job of that,” he said. “They’ve held teams to 35 to 38 plays for the entire night, and I think we ran somewhere in the 60s as far as offensive plays.”

PNG ended up hogging the ball a little more though, beating Santa Fe in time-of-possession, 27:37 to 20:23.

Along with Bost’s passing game, Faircloth says PNG’s ever-hardening defense is what held Santa Fe back enough to let Bost do what he does best, holding them to only 6 first downs on the night.

“Defense played well, again. It was a cold game, wind was blowing about 25 miles per hour,”Faircloth said. “Offensively it was tough but our defense played great and our kids were resilient. I’m definitely proud of Coach Templin and our defensive staff for putting together a great plan. Our defense executed really well.”

Bost added: “I think we did pretty good overall. I think we had some stuff to improve on but overall, offensively and defensively, we did pretty well. We’ve got a big week ahead.”

Faircloth said the players do a great job of working.

“We play 7-on-7 in the summertime and they come up here on their own and work,” he said. “They have a lot of practice time with us, honing things and making sure everything fits together.”

Bost acknowledges the same: “It just comes from hard work through the summer, and looking up to everyone, including the past quarterbacks.”

Other big performances of the week in Mid- and South County from Week 9: