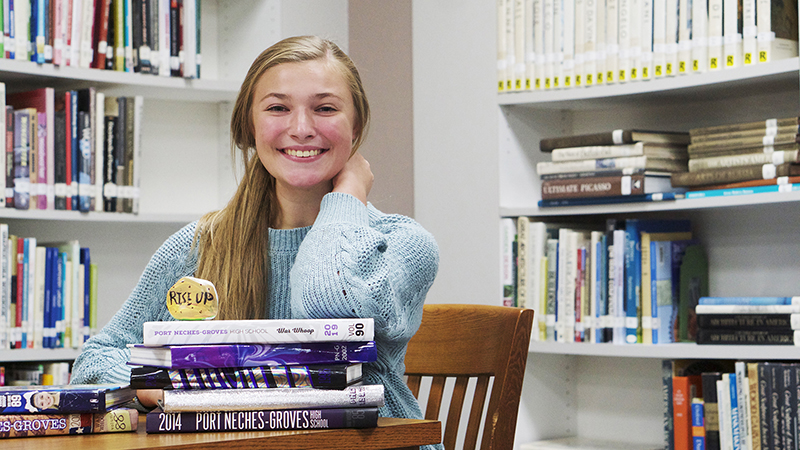 Kristen Crippen, a senior at Port Neches-Groves High School, is captain of the Indianette drill team, editor of the War Whoop yearbook and president of the student body council. (Cassandra Jenkins/The News)

PORT NECHES — Kristen Crippen, 17, is a senior at Port Neches-Groves High School and is the epitome of leadership. She holds not one, not two, but three prestigious campus leadership roles. 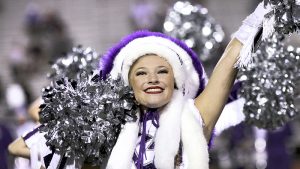 Kristen Crippen, a senior at Port Neches-Groves High School, is the senior captain of the Indianette drill team. Crippen performs during halftime of PNG’s homecoming game against Baytown Lee on Sept. 27. (Courtesy photo)

“In middle school you don’t do much,” she said. “In high school, I get to help with all these different committees. We have an encouragement committee, so when different teams or organizations have competitions or games, we decorate the sidewalk for good luck or give them little gifts. We also have our special needs committee, which every month we put together a little care package to give to them.

“I just like getting to help with our school, building the school spirit and showing what PNG is supposed to embody with unity.”

Role three, Crippen is also the War Whoop yearbook editor. She signed up for the journalism program her sophomore year, fell in love with working on the War Whoop and was selected editor last year.

“I joined the journalism program, but it was more so just to fill an empty spot in my schedule. I figured if I liked it, I liked it, if not it was OK,” she said. “But then I really started to enjoy it, so my junior year I joined the War Whoop staff.

“Mr. [Mike] Tobias has taught me a lot about what I can do to make pages look a lot better. He’s helped magnify how much I really do love it. I have a lot of ideas. I want this year’s yearbook to be amazing and for everybody to remember it.”

Journalism program director Tobias said he made the right choice in selecting Crippen to be the editor.

“I was a little nervous at first, because I knew she was going to have a very busy senior year but I’m very confident in her,” he said. “It’s not just yearbook, but Indianettes, student council and everything else. She’s busy, but I knew I made the right choice after all that.”

Crippen said her short-term goals include deciding on a major between forensic science, pharmacy tech and engineering.

“I really do enjoy science,” she said. “My dad and I always watch Forensic Files, Criminal Minds and all that, so I’ve been interested in that since I was younger. I also like math and feel like it’s one of my natural academic talents.”

Crippen is hoping to attend the University of Texas at Austin next fall once she’s settled on a major. Crippen said before she leaves, she wants to thank everyone who has played a vital role in her life.

“When I move off to college, I want to make sure that I keep my roots with everybody [at PNG],” she said. “I want to remember all the life lessons I’ve learned here and keep those through my adult life.”