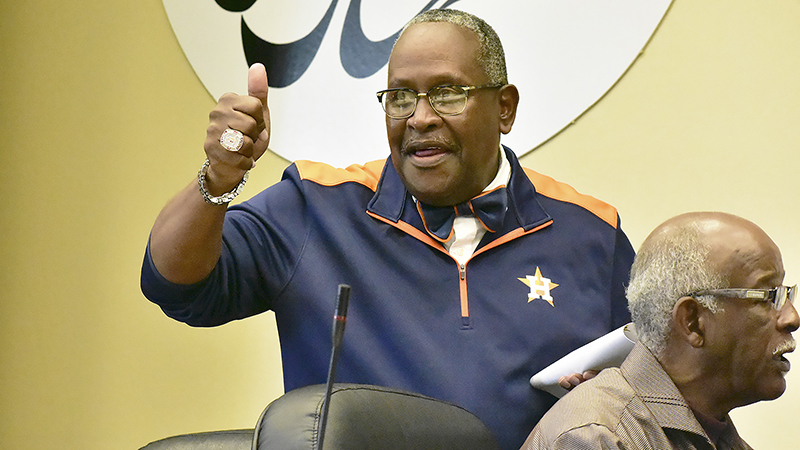 Nearly two months after the first deadline was set for a report on an outside search for city manager, the Port Arthur City Council met in an executive session with a representative from a Dallas-area search firm during a 50-minute special called meeting Monday morning.

Council members are keeping the names of candidates confidential for the time being. Interim city manager Ron Burton said Monday he has not yet indicated whether he’s interested in becoming a candidate for the permanent role.

Now, it’s up to the council to determine a timeline for a new hire.

Mayor Thurman Bartie said the city will need time to study the list of candidates.

“We have to go through it and have a good understanding of how we want to approach it from this point,” Bartie said. “We’re nowhere close to a candidate right now. What we’re close to is coming up with the information each councilperson will study from the list of candidates, which we will see, and then we will come up with a list of, maybe, some quarterfinalists or whatever have you, and then maybe semifinalists and then on to the finalists. It’s a process.”

Bartie added the list will be made public at an appropriate time but could not give a timeline as to when that will happen.

During the open session, Mayor Pro Tem Harold Doucet suggested the list of candidates be made available to the public and asked city attorney Val Tizeno why the list could not be deliberated in an open session.

“I think we should be as transparent as possible,” he said.

Tizeno said council members asked for an executive session when calling for the special meeting at the request of Baker Tilly.

Edward Williams, Baker Tilly’s representative, said while addressing the council that having the closed meeting would protect the search’s integrity.

“Some of the applicants have not spoken with employers,” Williams said. “By making this public, this exposes applicants to employers.”

The city previously set deadlines of Sept. 30 and Oct. 14 for a first report of candidates. Council members expressed faith in the search process despite the length of time.

An in-house search stalled in March of this year.

“We have an opportunity to pick the qualified candidates,” Councilman Thomas Kinlaw III said. “We have a process. We just got the information today. We need to scrub the information. We need to process the information, and hopefully we come back as a collective council to decide on which candidates. It’s a process, but we do have competent people in the search firm that’s going to provide quality names.”

In other business Monday: