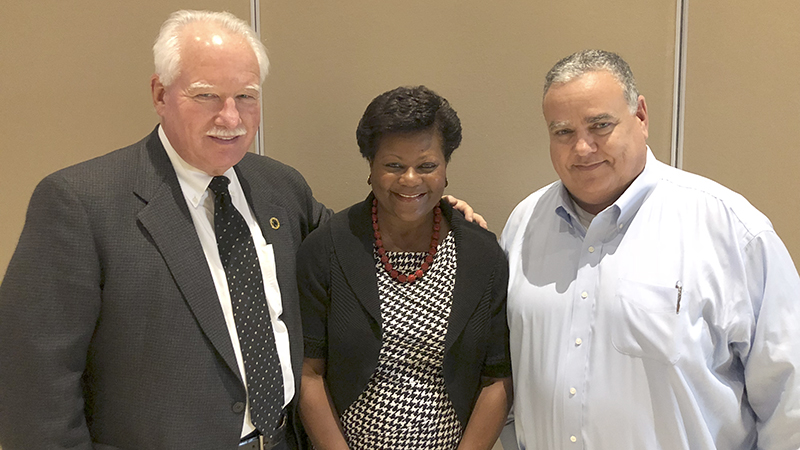 Digging up a dead body or a county commissioner and a state representative trading barbs over college dancing or a mayor who began his talk by singing the first 15 lines of his speech.

I and many others were able to enjoy these surprising nuggets during recent Greater Port Arthur Chamber of Commerce luncheons (one was a breakfast gathering).

Through 20 years of professional journalism, there aren’t many politicians who’ve attended as many of these style events as I have. It comes with the business, and you just know ahead of time that most are going to be boring.

Thankfully, things are not boring in Port Arthur, where surprising and noteworthy conversation is expected.

During August’s Chamber luncheon and South County legislative update, Jefferson County Judge Jeff Branick joked that State Rep. Dade Phelan only attended the University of Texas because he could not get into Baylor.

A couple of beats later when Phelan took the microphone, the representative responded: “I did get into Baylor, by the way. I just wanted to be able to dance, on occasion.”

Low-hanging fruit for a joke? Maybe.

Is it funny? I sure thought it was.

Things went up a notch a month later during the Chamber’s City and Regional Breakfast Update.

However, Bartie was also following about a dozen other speakers before he took the microphone, so he decided to liven up the crowd by singing his introduction.

The move clearly caught a few people by surprise, but sure as heck got everyone’s attention. I certainly enjoyed the change in tone.

Still, I have to give it up to Jefferson County District Attorney Bob Wortham, who made the most of his time at Tuesday’s Chamber Membership Luncheon.

He opened by noting brevity is a quality he hoped to display with his remarks.

Check one for me. I love an elected leader with a goal to say less, not more.

Wortham joked that he cannot hold a job while referencing his stops in various roles throughout a storied legal career.

“I started in the D.A.’s office; that is where I want to end,” he said, adding he began as an entry-level misdemeanor prosecutor who “really enjoyed” learning all there was associated with the office.

“I even got the opportunity to dig up a dead body towards the end of my term,” Wortham said, explaining the victim was buried in Vidor.

“We went out there to look for the body, and I asked, ‘how are we going to know when we hit it,’” Wortham added. “They said, ‘you’ll know.’ And they were right.”

According to Wortham, it was just himself and another officer who could stand the odor.

“We were out there digging with our hands because we couldn’t use the shovel,” he said. “Everybody else was going to Walmart to get some spray to try and clear up the air.”

That was the story and it certainly had my attention. Wortham went on to explain a couple of second chance programs his office promotes to benefit first-time and non-violent offenders.

That was important news — we reported it Wednesday — but I can tell you, the story I went home to tell my wife about was a dead body. Pretty interesting for a Chamber luncheon.