Questions surface about pipeline route from Beaumont to Port Arthur 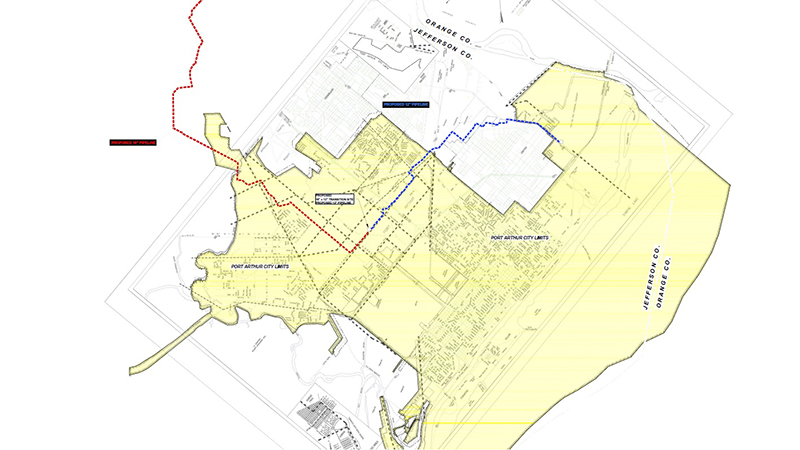 A map of the 16-inch (dotted in red) and 12-inch (blue) pipeline running from the Beaumont Tank Farm to Total Petrochemicals. Port Arthur is shaded in yellow. (Courtesy image)

A member of the city of Port Arthur’s pipeline advisory committee is advocating for residents affected by a new pipeline project to fairly negotiate prices for service on their property.

“I’ve been in situations where companies place pipelines across community properties, and those people don’t have a say so,” Warren Field said. “They don’t pay them sufficiently.”

Companies often pay property owners money for running a corridor through their land, but sometimes only a set minimum is paid to the owner, he said.

“The question is, do they pay them sufficiently?” Field said. “Homeowners should be able to negotiate prices.”

The Port Arthur City Council approved a major permit for Houston-based Enterprise Products Partners to construct a 16-inch pipeline running from the Beaumont Tank Farm into the northwest city limits of Port Arthur.

That line turns at a 90-degree angle northeast and connects with a 12-inch pipeline that runs through a parcel of land in Port Neches, goes around the northern borders of Groves and runs back into Port Arthur limits to Total Petrochemicals. The pipeline, which will transport ethane from the tank farm to Total.

Field joined the pipeline advisory committee with a technical background in engineering and said he understands the necessity for the pipelines, given the industrial base in the city and surrounding areas.

Among his concerns, however, is the compensation or lack thereof Port Arthur or its residents receive.

“A lot of times, people come and do these jobs, and they don’t leave anything for our city,” Field said. “Anytime we have a company come in, let them know we need to know all the technical systems they are using. Let us know you’re coming in and tell us what you are doing.”

Chiefly important to Field is the potential for income residents can receive for such projects. He said he won a court case against another pipeline company about three years ago and has in the past received fair compensation from Enterprise for work across his property.

He said his residence is not impacted by Enterprise’s latest pipeline route.

“The fair compensation isn’t always consistent,” Field said. “The homeowner should have input on the final price of what they’re doing. A lot of pipes, people leave in the city and they’re just lying there.”

Asked if he was concerned about property owners’ negotiating power with such companies, Bartie answered: “That’s why we have the pipeline committee to ask those questions.”

The pipeline advisory committee recommended approval of the permit on Sept. 23. A public hearing on the pipeline was held during Tuesday’s city council meeting.

An Enterprise employee deferred calls to Marilyn Terry, the company’s land representative. She could not be reached for comment.

In applying for the permit, Enterprise provided to the city information related to:

Port Arthur resident Gloria Sanchez was concerned as to whether the city would be prepared for any disaster that could arise from the pipeline and residents, if impacted, would receive proper medical care.

“Who’s going to be responsible for that? Nobody,” Sanchez said. “In the meantime, people are going to need medical help, and nobody is there for them. I like to prevent things before something happens.”

She referenced a 2017 fire at a German Pellets silo at the Port of Port Arthur that caused the structure to collapse after 52 days of smoldering. A hot spot was discovered in an adjacent silo less than two weeks later.

Residents took part in a protest citing health problems as a result of the continuing smoke, according to a January 2018 article in The News.

Sanchez also expressed concern that crews outside of Port Arthur would be subcontracted for Enterprise’s pipeline project instead of local workers, and that the condition of neighborhood roads in Port Arthur is not suitable for pipeline work.

“Our streets are already in bad shape, every single one of them,” Sanchez said. “They’re going to use the streets, and the traffic is going to be terrible sometimes.”