SANTA FE – The Port Neches-Groves Indians did what they needed to do to maintain their share of second place in Division 12-5A-II as they defeated the host Santa Fe Indians 20-7 in blustery conditions on Friday night.

With temperatures hovering in the low 50s with a steady wind of close to 20 mph, PNG used a solid ground game combined with a stifling defense to improve to 6-2 overall and 4-1 in the district, one game behind front-running Barbers Hill. Meanwhile, Santa Fe plummeted to 1-7 overall and 0-5 in division play. 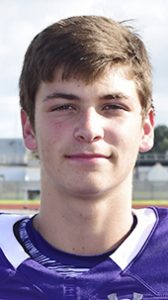 PNG opened the scoring with 5:58 remaining in the first quarter on a 17-yard run by Kody Trahan. The wind pushed Tate Sandell’s PAT attempt off target to leave the score at 6-0.

PNG boosted the lead to 13-0 with 45.9 seconds remaining in the first half when QB Blake Bost bulled his way in from 2 yards out. Sandell converted the PAT to close out the first-half scoring.

PNG had 205 yards of offense in the first half, while Santa Fe had just 34 yards. PNG dominated time of possession over the first two quarters, holding the ball for 14:26, as compared to Santa Fe’s 9:34. PNG had 12 first downs in the first half, with Santa Fe moving the chains just twice.

Santa Fe came out on fire to start the second half, scoring on the opening drive of the third quarter as Tristan Cundiff found paydirt at the end of a 41-yard run to cut the PNG to 13-7 just 98 seconds into the third quarter. Santa Fe followed that by recovering the ensuing onsides kick, but could not capitalize on a drive that started in PNG territory.

The score stood that way until Bost scored his second TD of the game, this time on a 1-yard run with 3:16 remaining in the fourth quarter to give PNG what proved to be a lead that was too much for Santa Fe to overcome.

Zane Hernandez led the PNG rushing attack with 123 yards on 14 carries. Bost was 14-of-27 through the air for 117 yards and one interception. Brady Nail had four receptions for 46 yards.

PNG prevented Santa Fe from scoring after Santa Fe recovered the onside kick early in the third quarter after narrowing PNG’s lead to 13-7. Santa Fe never mounted a serious scoring threat after that. PNG’s stand on that drive seemed to deflate the host Indians. Santa Fe’s longest drive in terms of time of possession was just 2:09.

PNG senior linebacker Santiago Agudelo, who anchored a tenacious PNG defense that kept Santa Fe in check with the exception of one drive. Agudelo was just one of several standout defenders for PNG, which never allowed Santa Fe to establish any sort of tempo.

PNG closes the home portion of its regular-season schedule when it entertains the district-leading Barbers Hill Eagles at 7:30 p.m. Friday at The Reservation. After that, it’s the annual Bum Phillips Bowl against Nederland. That contest is slated for a 7:30 p.m. kickoff at Nederland’s Bulldog Stadium on Nov. 8.