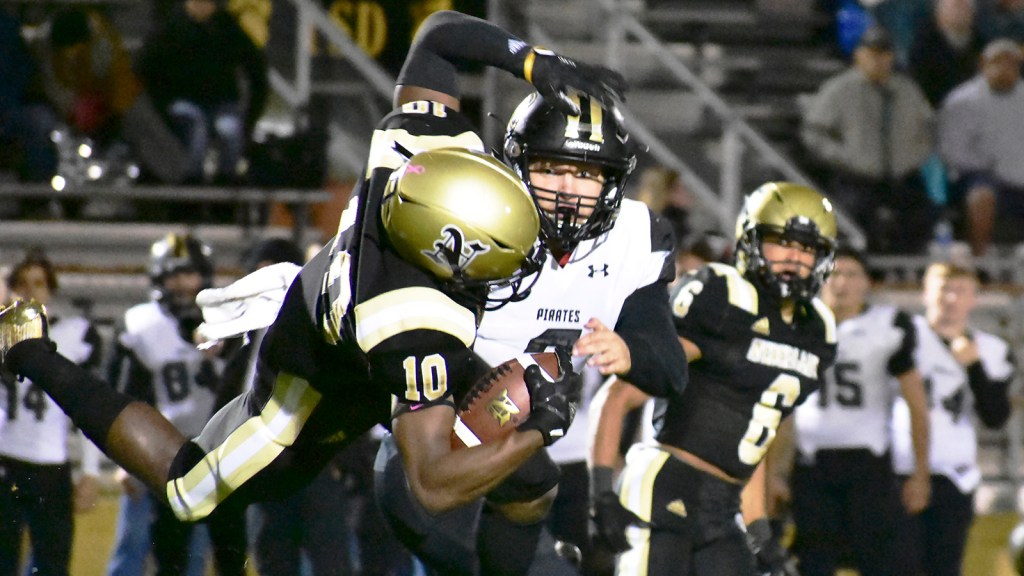 Josh Mazyck of Nederland hurdles while carrying the ball against Vidor on Friday in Nederland. (I.C. Murrell/The News) 10-25-19

NEDERLAND — Using a second-half passing attack, the Nederland Bulldogs defeated the Vidor Pirates 10- 6 on senior night for their first home victory this season.

Junior Josh Mazyck scored the winning touchdown on a 4-yard run with 2:46 left in the game. The score was set up by two passes of 30 and 11 yards from senior quarterback Bryce McMorris to sophomore wide receiver Kyndon Fuselier.

Most of the first half was played outside the red zones as each team had trouble maintaining a drive. Nederland took the opening kickoff at their own 13 and got a quick first down.  Two short runs by Josh Mazyck and an incompletion by McMorris led to a quick kick on fourth down. 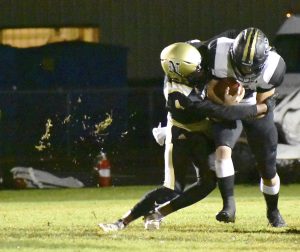 Kerrington Broussard of Nederland lays the first hit on a Vidor ball carrier in the first quarter Friday in Nederland. (I.C. Murrell/The News) 10-25-19

Vidor took over on their 28 and started pounding the rock between the tackles with Layne Wilhelm making most of the yardage.  On the ninth play of the drive, quarterback Dylan Dial fumbled as he stretched for extra yardage. Mikey Rangel recovered for the Bulldogs at their 43.

Nederland’s second possession went backward as Mazyck was tacked for a 3-yard loss before two incompletions by McMorris.  Cale Baker punted and the Pirates took over on their 28.

Wilhelm, Brad Nunez, and Dial each had short carries.  On fourth-and-1, Vidor’s Zach Seigrist punted to the Bulldog 28.

Mazyck carried twice for short gains before a McMorris incompletion on third down.  Baker punted and the Pirates took over on their 29.  Wilhelm, Nunez, and Dial carried the ball for a total of 10 plays before Vidor turned the ball over on downs at Nederland’s 24.  On the next play from scrimmage, McMorris threw to Cedric Pete, who made a great move to gain 17 yards.  He was stripped by Vidor’s secondary at the Bulldog 41.

Vidor took over for a 13-play drive highlighted by numerous short runs by Nunez.  The Pirates scored on a 1-yard sneak by Dial with 7 seconds left in the first half. The snap for the PAT was high and Vidor’s holder Gage Galloway tried to throw a pass, but was sacked by the Bulldogs leaving the Pirates with a slim 6-0 lead.

McMorris scrambled out of bounds after an 11-yard gain to the Vidor 40.  McMorris threw toward Fuselier who missed the ball and was hit by the Pirates’ safety resulting in two defensive fouls, one after the end of the play.

With the ball moved 27 yards to Vidor’s 13, the Bulldogs had a first-and-10 with 17 seconds left.  McMorris threw a screen to Kamden Grant for 8 yards before another timeout was called. McMorris threw the ball away under pressure from the Pirate defensive line.

Payne Barrow trotted onto the field with 1.8 seconds and drilled a 22-yard field goal to make the halftime score Vidor 6, Nederland 3.

McMorris connected with Fuselier twice to take the Bulldogs to the Pirate 9-yard-line.

Fuselier, who played both ways.  Fuselier made several important stops on Vidor runners throughout the game as well as contributing with timely receptions.
Up Next …
In 12-5A-II matchups, Nederland travels to Crosby while Vidor hosts Baytown Lee next Friday. Kickoffs are at 7:30 p.m.