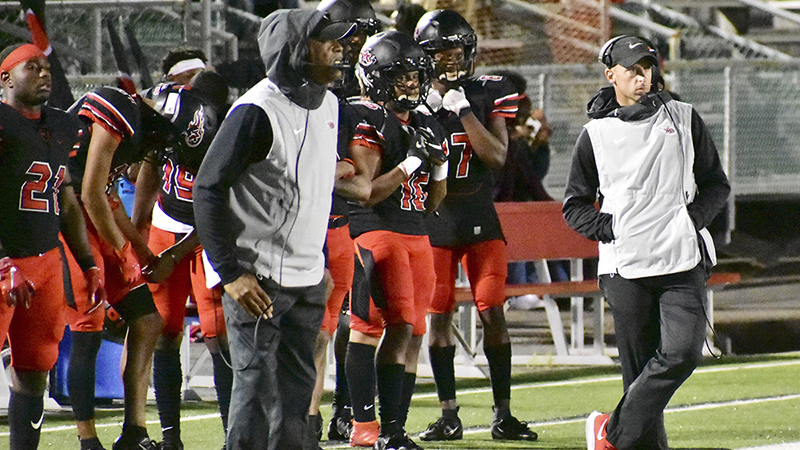 The Memorial Titans are looking for a win tonight after consecutive losses against New Caney and Porter. The Kingwood Park Panthers are looking for the same, and the similarities don’t stop there.

Though the Panthers (3-4, 2-2 in 9-5A-I) have scored 73 more points than the Titans in district play so far this season, they are coming to Port Arthur with the same record as Memorial (3-4, 2-2). Last Friday they lost to undefeated New Caney in a 41-point shutout defeat.

Kingwood Park and Memorial are closely matched offensively. Both average nearly the same yards on offense per game – 286.1 for the Panthers compared to 283.3 for the Titans. Total rushing and passing yards are also close, with Memorial edging out Kingwood Park in passing yards by 162. Kingwood likewise has had 230 more rushing yards than Memorial.

“Kingwood does a good job offensively,” Memorial head coach Brian Morgan said. “They run a bunch of different options and a bunch of Wishbone concepts out of the Spread that make you play really disciplined on defense. They’ve got a new scheme this year. They try to mix some things up, so they’re solid.”

The Titans continue to rely on sophomore quarterback Jah’mar Sanders’ passing game. Sanders still has the most passing attempts in the district, having gone 65 for 145, a 46.2 percent completion rate. Sanders is up to 798 yards so far this season, fifth most in the district.

Even so, Kingwood Park’s junior quarterback Hudson Dezell beats Sanders in total passing yards made by just 11, having gone 63 for 106, the second most attempts in the district.

The Panthers’ top receiver, senior Canen Adrian, contrasts well with Memorial’s senior receiver Tavian Gipson. Adrian has 15 more yards gained from receptions than Gipson, 309, but Adrian is first in the district for completions at 31, eight ahead of Adrian.

“They’ve got a really good receiver offensively,” Morgan said. “Canen Adrian I think is a good player, catches the ball well and can run well, makes plays. He’s done that for a couple of years now. He does a good job.”

The Titans’ best opening may instead come through the running game. The similarities break down when it comes to defense, as Kingwood Park has given up 1,496 yards rushing this year, the district’s third most, compared to Memorial’s 927.

Against Porter’s top-ranked defense last Friday, the Titans still managed 119 yards rushing. Junior running back Branden Chaney made both of Memorial’s touchdowns against the Spartans on carries of 2 and 9 yards. Chaney himself has the most carries in the district at 99, just behind New Caney senior quarterback Zion Childress with 96.

“Our guys have got to play disciplined,” Morgan said. “They do use some tempo so we’ve got to be disciplined while they’re going fast. It shouldn’t be a surprise to our guys but they do a good job.”