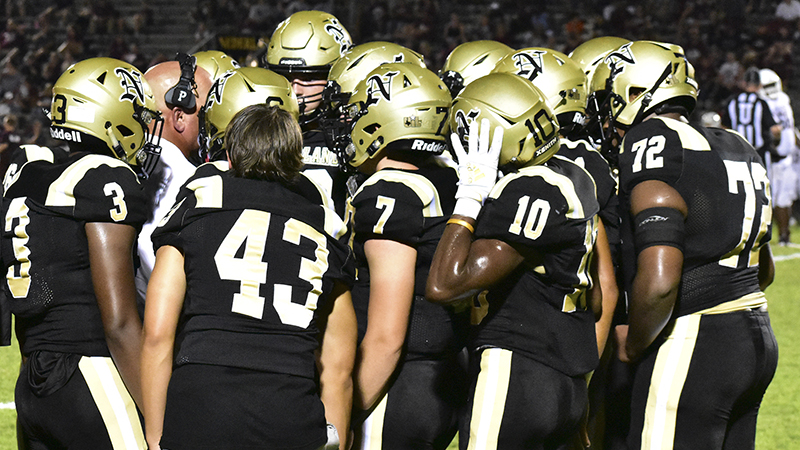 The Nederland Bulldogs’ efficient passing game will meet a nigh immovable defense put up by the Vidor Pirates when these forces meet Friday at Bulldog Stadium.

“We’ve had our battles with Vidor and we know what kind of game it’s going to be,” Nederland head coach Monte Barrow said.

“We’ve just got to get that across to our players what to expect Friday night. It’s not unlike last week where we played Baytown Lee. They had two losses and we are going to get a football team that doesn’t want to see that third loss. It’s getting late in the season and there’s playoff implications. Vidor’s in the same boat right now.”

Vidor still has the top defense in the district, allowing only 1,292 yards this season, 371 fewer than the next fewest in Crosby, though both teams have only played six games so far this year.

Vidor’s defense nonetheless still averages the fewest yards allowed per game at 215.3, compared to Nederland’s 302.3. The Pirates’ defense grinds runners to a halt, allowing by far the fewest rushing yards at only 496 for the year, which is 367 fewer than Crosby.

“I think it’s their tenacity to the football defensively that makes them a threat for sure,” Barrow said. “That’s the reason they’re the No. 1 ranked defense. They may not be the biggest or the fastest but they play as one unit that flies to the football very aggressively.”

Vidor also tops the district in total rushing yards at 1,700 in six games, though these numbers are likely offset by the Pirates’ much smaller passing totals. The Pirates have the second fewest passing yards at 258, just 36 above Santa Fe’s 222.

Vidor’s go-to running back, senior Brad Nunez, is one of only two in the district to break into triple digits on carries with 115. Averaging 6.33 yards per carry, Nunez leads the district in total rushing yards with 728 and tied for second with Bulldogs junior Josh Mazyck for most touchdowns, seven each.

Mazyck comes in third for total yards with 568 and the third most carries, 93.

Nederland however dwarfs Vidor’s numbers in passing. The Bulldogs are first the district with 1,517, which also has helped them rank second only to Barbers Hill for most total yards on offense.

Senior quarterback Bryce McMorris is head of a group of prolific passing quarterbacks in 12-5A-II who have thrown for more than 1,000 yards. McMorris leads in total yards at 1,521 and has the best completion rate at 57.8 percent.

McMorris, paired with Mazyck and top 12-5A-II receiver Kyndon Fuselier, will still need to find a way around Vidor’s defense.

“It’s a long week preparing for Vidor, especially defensively,” Barrow said. “They’ll be ready for this week to be over, but we have to go through the grind, Monday through Wednesday, if we’re to be ready Friday night.”